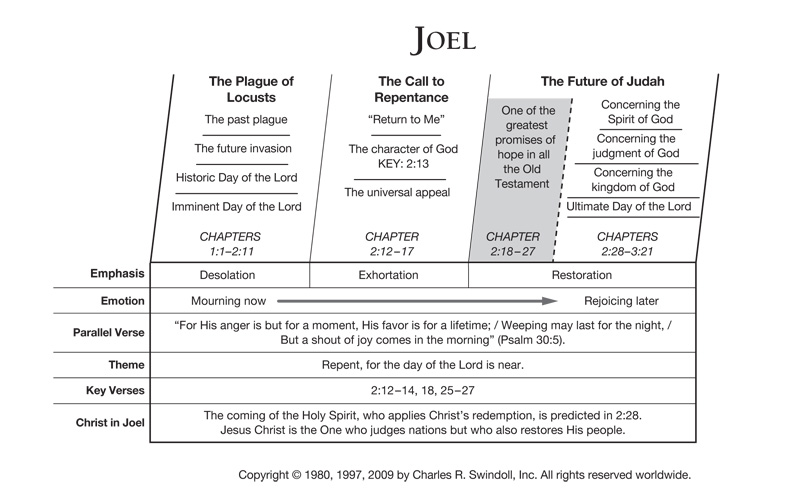 We know little of the prophet Joel beyond a few personal details contained in the book itself. He identified himself as the son of Pethuel, preached to the people of Judah, and expressed a great deal of interest in Jerusalem. Joel also made several comments on the priests and the temple, indicating a familiarity with the centre of worship in Judah (Joel 1:13–14; 2:14, 17). Joel often drew upon natural imagery—the sun and the moon, the grass and the locusts—and in general seemed to understand the reality that truth must have an impact on us in the real world.

Dating the writing of the book of Joel remains one of the most difficult tasks for Old Testament scholars because unlike most prophetic writers, Joel gave no explicit indication of his time period. In particular, Joel refrained from mentioning the current ruling kings. One of the most compelling arguments for dating the writing of the book of Joel explains this omission by suggesting the prophecy occurred in the aftermath of Judah's only ruling queen, Athaliah (d. 835 BC). Upon her death, she left only her young son, Joash, to rule. But because Joash was too young to rule, the priest Jehoida ruled in his place until he came of age. So if Joel prophesied during this caretaking period, it would make sense that he mentioned no official king. The book of Joel also makes ample mention of priests, temple rituals, and nations, such as Phoenicia, Philistia, Egypt, and Edom, which were prominent in the late ninth century BC. All of this points to a date of approximately 835 BC or soon after, making Joel one of the earliest writing prophets, as well as a contemporary of the prophet Elisha.

The book focuses its prophetic judgment on the southern kingdom of Judah with frequent references to Zion and the temple worship (Joel 1:13–14; 2:23, 32; 3:16, 21). Joel's familiarity with this area and the worship in the temple suggests that he lived in Judah, possibly even in the city of Jerusalem itself.

WHY IS JOEL SO IMPORTANT?

The book of Joel's importance to the canon of Scripture stems from its being the first to develop an oft-mentioned biblical idea: the day of the Lord. While Obadiah mentioned the terrifying event first (Obadiah 15), Joel's book gives some of the most striking and specific details in all of Scripture about the day of the Lord—days cloaked in darkness, armies that conquer like consuming fire, and the moon turning to blood. Rooted in such vibrant and physical imagery, this time of ultimate judgment, still future for us today (2 Thessalonians 2:2; 2 Peter 3:10), makes clear the seriousness of God's judgment on sin.

WHAT'S THE BIG IDEA IN JOEL?

Using what was at that time the well-known locust plague in Judah, Joel capitalized on a recent tragedy to dispense the Lord's message of judgment and the hope of repentance. In referring to the terrible locust plague, Joel was able to speak into the lives of his listeners and imprint the message of judgment into their minds, like a brand sears the flesh of an animal.

One commentator notes that the day of the Lord, which is a reference not to a single day only but to a period of judgment and restoration, consists of three basic features:

Visions of the future, such as the kind we find in Joel or even in the pages of the more well-known book of Revelation, can often seem remote from our day-to-day existence. However, their vivid pictures of destruction should serve to awaken us from our spiritual stupor. Do you ever struggle with feeling complacent? A strong dose of apocalyptic imagery like we find in Joel might just do the trick of opening your eyes to the necessity of faithfully following after God every moment of your life.

Find resources in the book of Joel in our resource library.