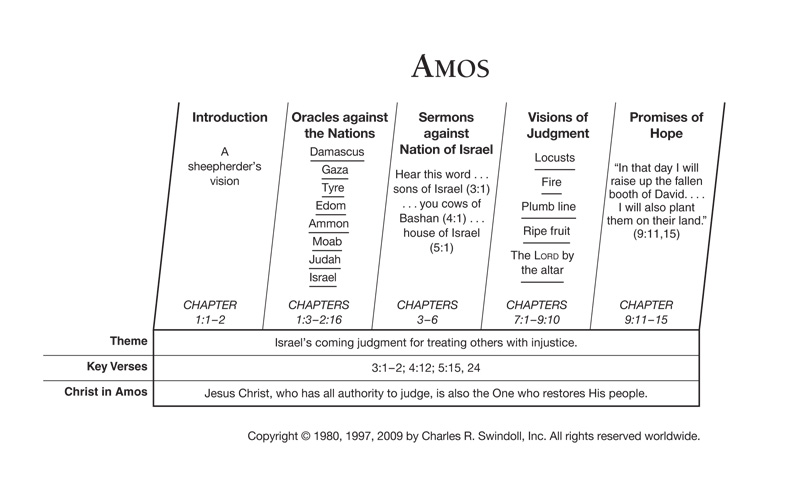 The prophet Amos lived among a group of shepherds in Tekoa, a small town approximately 10 miles south of Jerusalem. Amos made clear in his writings that he neither came from a family of prophets nor did he even consider himself one. Rather, he was “a grower of sycamore figs” as well as a shepherd (Amos 7:14–15). Amos' connection to the simple life of the people made its way into the centre of his prophecies, as he showed a heart for the oppressed and the voiceless in the world.

Amos prophesied “two years before the earthquake” (Amos 1:1; see also Zechariah 14:5), just before the halfway point of the eighth century BC, during the reigns of Uzziah, king of Judah, and Jeroboam, king of Israel. Their reigns overlapped for fifteen years, from 767 BC to 753 BC.

WHY IS AMOS SO IMPORTANT?

Amos was fed up. While most of the prophets interspersed redemption and restoration in their prophecies against Israel and Judah, Amos devoted only the final five verses of his prophecy for such consolation. Prior to that, God's word through Amos was directed against the privileged people of Israel, a people who had no love for their neighbour, who took advantage of others, and who only looked out for their own concerns.

More than almost any other book of Scripture, the book of Amos holds God's people accountable for their ill-treatment of others. It repeatedly points out the failure of the people to fully embrace God's idea of justice. They were selling off needy people for goods, taking advantage of the helpless, oppressing the poor, and the men were using women immorally (Amos 2:6–8; 3:10; 4:1; 5:11–12; 8:4–6). Drunk on their own economic success and intent on strengthening their financial position, the people had lost the concept of caring for one another; Amos rebuked them because he saw in that lifestyle evidence that Israel had forgotten God.

WHAT'S THE BIG IDEA IN AMOS?

However, while their outer lives gleamed with the rays of success, their inner lives sank into a pit of moral decay. Rather than seeking out opportunities to do justice, love mercy, and walk humbly, they embraced their arrogance, idolatry, self-righteousness, and materialism. Amos communicated God's utter disdain for the hypocritical lives of His people (Amos 5:21–24). His prophecy concludes with only a brief glimpse of restoration, and even that is directed to Judah, rather than the northern kingdom of Israel (9:11–15).

Injustice permeates our world, yet as Christians we often turn a blind eye to the suffering of others for “more important” work like praying, preaching, and teaching. But the book of Amos reminds us that those works, while unquestionably central to a believer's life, ring hollow when we don't love and serve others in our own lives. Do you find yourself falling into that trap at times—prioritizing prayer over service?

The prophecy of Amos should simplify the choices in our lives. Instead of choosing between prayer and service, the book of Amos teaches us that both are essential. God has called Christians not only to be in relationship with Him but also to be in relationships with others. For those Christians whose tendency has been to focus more on the invisible God than on His visible creation, Amos pulls us back toward the centre, where both the physical and the spiritual needs of people matter in God's scheme of justice.

Find resources in the book of Amos in our resource library.