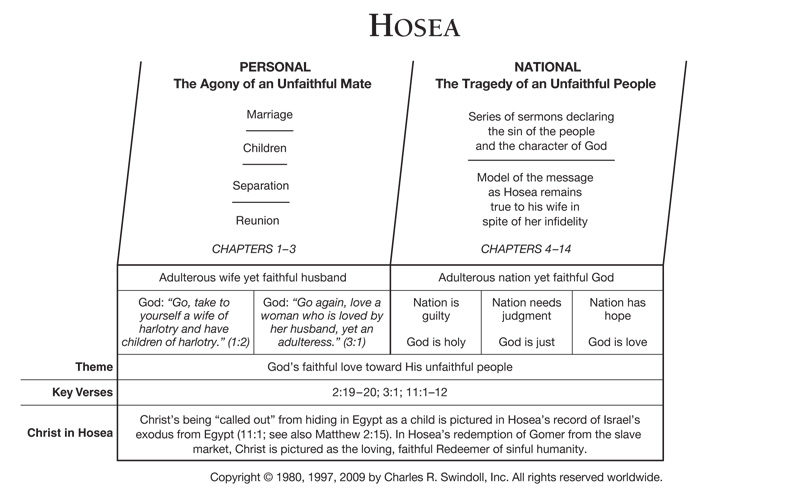 Hosea revealed little about his background, though his book of prophecy offers a few glimpses into his life. The prophet's name means “salvation,” likely a reference to Hosea's position in Israel as a beacon of hope to those who would repent and turn to God because of his message.1 Following the command of God, Hosea married Gomer, a bride God described as “a wife of harlotry” (Hosea 1:2) and a woman who bore Hosea three children, two sons and a daughter (1:4, 6, 9). God used the names of Hosea's children, along with his wife's unfaithfulness, to send specific messages to the people of Israel.

In Hosea 1:1, the prophet identified the kings that ruled during his prophetic ministry. The first four—Uzziah, Jotham, Ahaz, and Hezekiah—reigned over the southern kingdom of Judah from 790 BC to 686 BC, while Jeroboam II ruled the northern kingdom of Israel from 782 BC to 753 BC. This indicates that Hosea lived in the middle to late eighth century BC (755–715 BC), making him a contemporary of the prophets Isaiah and Micah.

Hosea directed the early portion of his prophetic warnings to Jeroboam II, a descendant of the house of Jehu whose son, Zechariah, would soon come to ruin (Hosea 1:4; 2 Kings 15:8–12). Because this prophecy against the descendants of Jeroboam involved the birth of Hosea's children, we can conclude that he lived in the northern kingdom, where the names of his children would have had the greatest impact.

WHY IS HOSEA SO IMPORTANT?

More than any other prophet, Hosea linked his message closely with his personal life. By marrying a woman he knew would eventually betray his trust and by giving his children names that sent messages of judgment on Israel, Hosea's prophetic word flowed out of the life of his family. The cycle of repentance, redemption, and restoration evident in Hosea's prophecy—and even his marriage (Hosea 1:2; 3:1–3)—remains intimately connected to our lives. This sequence plays itself out in the lives of real people, reminding us that the Scriptures are far from a mere collection of abstract statements with no relation to real life. No, they work their way into our day-to-day existence, commenting on issues that impact all our actions and relationships.

WHAT'S THE BIG IDEA IN HOSEA?

Structured around five cycles of judgment and restoration, the book of Hosea makes clear its repetitious theme: though God will bring judgment on sin, He will always bring His people back to Himself. God's love for Israel, a nation of people more interested in themselves than in God's direction for their lives, shines through clearly against the darkness of their idolatry and injustice (Hosea 14:4).

Throughout the book, Hosea pictured the people turning away from the Lord and turning toward other gods (4:12–3; 8:5–6). This propensity for idolatry meant that the Israelites lived as if they were not God's people. And though God told them as much through the birth of Hosea's third child, Lo-ammi, He also reminded them that He would ultimately restore their relationship with Him, using the intimate and personal language of “sons” to describe His wayward people (1:9–10; 11:1).

Do you know the saving power of God, now offered to us through His Son, Jesus? If so, as a redeemed child of God, have you offered “redemption” or forgiveness to those in your life who were once under your judgment? Not only does the book of Hosea provide an example of God's love to a people who have left God behind, but it also shows us what forgiveness and restoration look like in a close relationship. The book of Hosea illustrates that no one is beyond the offer of our forgiveness because no one sits outside God's offer of forgiveness. Certainly, God brings judgment on those who turn from Him, but Hosea's powerful act of restoration within his own marriage set the bar high for those of us seeking godliness in our lives.

Find resources in the book of Hosea in our resource library.