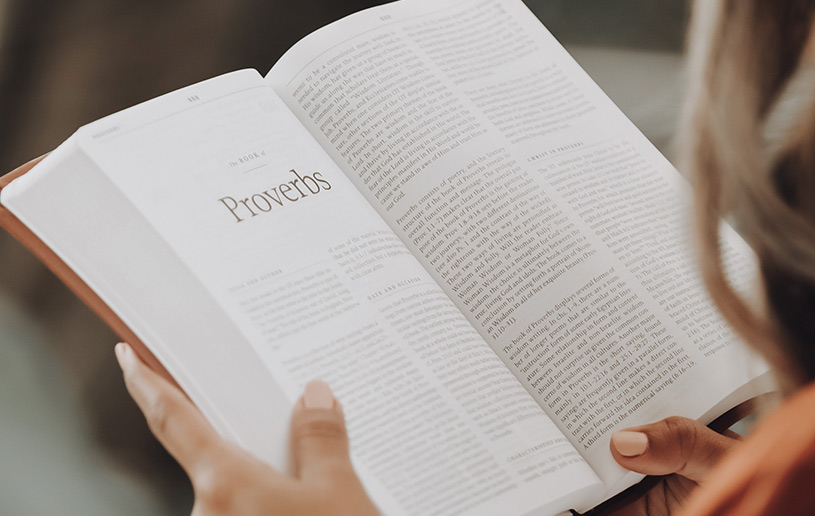 Perhaps you have heard and maybe even repeated the following: “a penny saved is a penny earned,” or “two wrongs don’t make a right,” or “don’t count your chickens before they hatch.” Sayings like these are distillations of human observation and experience meant to provide general guidance for living. We call them proverbs.

A proverb is a short, straight-to-the-point statement about moral truth or general observation on life designed to direct readers toward right and away from wrong. Stylistically, proverbs rely on different kinds of parallelism, similes, repetition, and metaphors for emphasis. As a type of literary form common to wisdom literature, they are found throughout the Bible (even Jesus used proverbs, see Mark 12:17) but are predominantly in the books of Proverbs, Ecclesiastes, and Job.

The general guidelines for understanding and interpreting wisdom literature also apply to interpreting a proverb.

1. The purpose is not to teach theology but to make us wise and able to make righteous life choices.

2. Wisdom literature uses many figures of speech and stylistic devices to make a memorable point and for emphasis.

3. Context determines meaning. Wisdom literature needs to be contextualized in its historical setting of the Ancient Near East, since Solomon was not the only one who wrote and collected wisdom literature. We need to understand a single proverb or chapters of proverbs in the context of that style of writing. All wisdom writings, in particular problem passages, need to be understood in the framework of the rest of Scripture.

Here are some specific guidelines for interpreting a proverb.

1. Put the proverb back into its historical context by noting who the author is and the audience to whom it is written.

2. Interpret individual proverbs in light of the immediate literary context they appear in, as well as the overall structure of the chapter, purpose, and themes of the book.

4. Understand that the writers of proverbs were not making promises or stating guarantees from God. They were giving brief, general truth about life based on observation and experience filtered through biblical revelation. They generalize what takes place without making an irreversible rule that fits all circumstances. For example, Proverbs 22:6 says “direct your children onto the right path, and when they are older, they will not leave it.” This is generally true but can’t be claimed as a promise to hold God to.

5. Realize that some proverbs are unconditionally true. For example, “the Lord demands accurate scales and balances; he sets the standards for fairness,” and “we may throw the dice, but the Lord determines how they fall” (Proverbs 16:11, 33).

6. Recognize that some proverbs are merely descriptive showing life as it is. “A bribe is like a lucky charm; whoever gives one will prosper” (Proverbs 17:8). Other proverbs are prescriptive, trying to influence behaviour. “The Lord detests the use of dishonest scales, but he delights in accurate weights” (Proverbs 11:1).

7. Understand the human characters referred to in biblical proverbs. The fool is not dimwitted but is rather an unbelieving pagan. The simple are those who are immature and naive. The sluggard is one who is unproductive and lazy. And the mocker is one who is antagonistic and hard-hearted.

8. When reading a proverb of any kind, ask “how do I understand the wisdom and truth of this proverb in light of the person and work of Jesus Christ?” As with all wisdom literature proverbs show the sinfulness, ignorance, and folly of humanity and point to Jesus. He is proverb in the flesh–He is the Wisdom and Truth of God. Through proverbs, Jesus speaks to sinners who are searching for a wise teacher to disperse their ignorance and errors and to help them think, believe, speak, and do rightly.

When Jesus came He was the fulfilment of the longing for One who would be greater than Solomon (Matthew 12:42). The greater Solomon is here–greater in holiness, greater in glory, greater in power, and far greater in wisdom. Let us worship Him, hear His wise teaching, be wise regarding salvation, and let us live wisely to His glory and honour.