The Trouble with Genesis 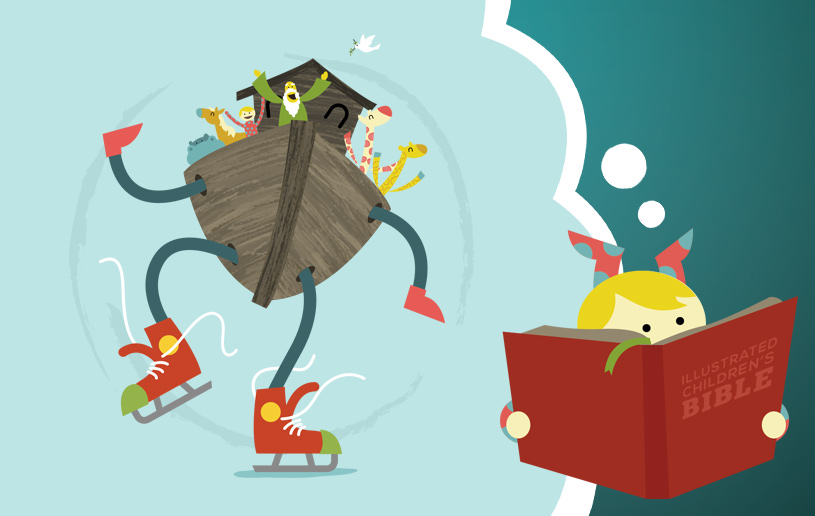 We've had to lay down the law at our house: No more Bible reading before 6 a.m.

That's right, it was getting out of hand. It all started on a winter morning when our son Stephen was three years old and learning to count. He had worked his way up to 10, then 20, and finally to 99. At this point his face grew wrinkled. Where to from here? I told him where to find one hundred. And how to start all over again… “See how high you can get,” I said, not knowing that this is torture for an earnest child who cannot resist a challenge.

By evening he hit 999 and was searching for more. I told him how to find it. Next morning he announced: “I'm at 3,007.” By mid-week he had topped the 10,000 mark. Oh great, I thought. Come kindergarten he'll need counselling.

The problem worsened as he entered school, journeying past Dick and Jane and into grade two where they string words together into sentences. One day he rushed home with a library book on dinosaurs. Opening to page one, he began to read: “Fifty…um…billion…years ago….”

“I'll tell you what,” I said. “You read the book of Genesis and I'll buy you a brand new pair of ice skates.” He looked up from his book. “Ice skates?” He thought he'd won the lottery. The child wolfed down his supper, threw on his jammies, and climbed into bed early. His mother and I were shocked. Once in bed, the child began to read aloud: “In…the…um…beginning…um…God….”

Ah, I thought to myself, my wallet is safe. After all, the boy is seven. Genesis is 50 chapters. At this rate he will finish sometime during his Sophomore year of college. What good will size two ice skates be then?

A few hours later I fell asleep, entertaining nostalgic dreams of the time my own father talked me into reading the New Testament. The reward was a coveted digital watch, and, upon finishing Revelation, I showed up to claim the prize. “Aha,” said Dad. “You read it in English, didn't you. I told you to read it in Greek.”

The nightmare was interrupted by a seven-year-old standing at the foot of my bed holding a big red Illustrated Children's Bible, and smiling proudly. “Daddy, guess what? I'm on chapter six!”

“Uh…that's really good, Stephen. What time is it?” Turning my head I was confronted with the awful truth: It is 4:03 a.m. Mountain Standard Time. “What in the world? Stephen, go back to bed.”

The child obeyed—or at least partly. At 6:30 he had been on a cruise with Noah, a mountain with Abraham, breathed the sulphur of Sodom and Gomorrah, and learned all he will ever need to know about circumcision. I sat down beside him as he zeroed in on chapter 25. “Dad, what's a Hittite?”

At 4 a.m. the next day, Jacob stole Esau's blessing. At five Joseph's wicked brothers sold him to Egypt. At six they were forgiven—and by seven Stephen was as miserable a little boy as you will meet. “Jeffrey, you stole my Lego!” he hollered, waking me from slumber. Then he began pounding on his little brother. Screaming ensued.

As I conjure up punishment, I study the boy on my lap. He reminds me of me. When I was old enough to read I found the Bible fascinating. But it was always easier to enjoy it as literature than to let it change my life. I've read Jesus' words “Love your neighbour as yourself,” and just like Stephen, I've pounded on those around me. Not with fists, but with words. With gossip. I'm still learning that there is no virtue in reading about Abraham's obedience. I must obey his God. There is no virtue in studying Jesus' words. I must put them into practice. James said it best: “Do not merely listen to the word, and so deceive yourselves. Do what it says.”

“Stephen, I want you to say sorry to Jeffrey, then get some sleep.”

“Yup. But first I'd just like to hang on to you a minute.” He snuggles up close. “Son, would you do something? Remember that the most miserable people I know are the ones who can tell you all about the Bible without living it. I'm glad to see you reading God's words, but that's not enough. Let them change you, OK?”

On the following Monday, the child received a pair of size two ice skates. And a bookmark too. It's covered with panda bears and the verse: “Love the Lord your God with all your heart and with all your soul and with all your mind…and your neighbor as yourself” (Matthew 22:37, 39).

By Friday, Stephen was using it to mark his spot—in Leviticus.