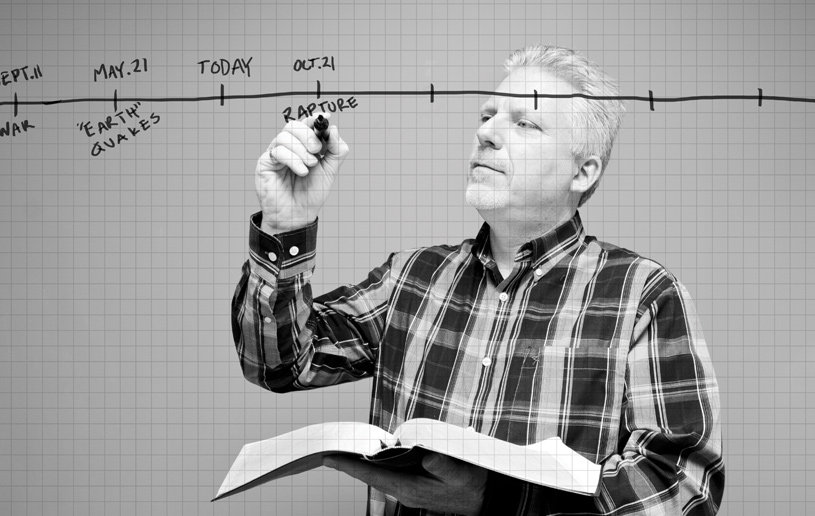 I remember the time I spoke to the Los Angeles Rams at their pre-game chapel service, and later that night, they creamed the Dallas Cowboys. The evening before Super Bowl XIV, I spoke to the Steelers, and they ripped the Rams apart the next day. Then I spoke to the Dodgers before they took the field against the Reds, and they cleaned their clock!

I am now being asked to speak to the Bills, the Jets, the 49ers, the Chicago Cubs, and the Texas Rangers. No, not really. But it is a lot of fun when you get a winning streak going.

When a winning streak happens in sporting events, sportscasters call it “athletic momentum”—that surge of assurance, that deep sense of confidence that says, “No doubt about it; we're gonna win this thing!” If I didn't know better, I might call my pre-game chapel winning streak, “prophetic momentum.” I could lead teams to believe I have such a gift: “You guys wanna win? Just invite me over a few hours before the game, and it's in the bag. When I speak, you win!”

No reason to kid ourselves. In the long run, I'm about as prophetically gifted as your local weather forecaster. And my momentum is about as surging as a poached egg. Whatever connection there is between my speaking and somebody's winning is purely coincidental. Prophetic utterance is not my bag.

True prophets—the authentic variety—have long since fled the scene. But they once walked the earth like spiritual giants. They were daring men and women, who were willing to stake their lives on the absolute truth of their claims. They allowed for no margin for error in judgment, no mental mistake of even the smallest detail. And they didn't predict obvious generalities like, “Tomorrow, the sun will rise,” or, “Tonight, it's going to be dark.” No, original, genuine prophets were risky. I mean some were downright scary! Their credentials weren't based on diplomas from impressive graduate schools or their escalating ages or how high they had risen through the ranks, slowly earning the right to be respected.

Back then, a prophet was a prophet because he or she passed a very simple (yet exacting) test: if the prophet were true, whatever he or she predicted, that very thing would occur. If the prophet happened to be a phony, nothing would happen. Moses laid down that precept in simple terms in Deuteronomy 18:21-22.

Take Isaiah, the brilliant son of Amoz, who passed Moses' test with flying colours. Around 710 BC, a strong Assyrian army besieged Jerusalem. When good King Hezekiah heard how his people were intimidated and paralyzed with fear, he pled with Isaiah to pray for deliverance. Isaiah did one better. He predicted that Sennacherib, the Assyrian king, would hear a rumour of trouble back home—a rumour that would cause him to return to Assyria without attacking Jerusalem. You guessed it. That's exactly what happened (Isaiah 37:5-7, 36-38).

And when Isaiah talked about “a virgin” someday being “with child” and calling this child's name “Immanuel,” it was no fluke (Isaiah 7:14). Eight hundred years later, in a feeding trough in Bethlehem, the incredible reached zenith proportions. For the first time in the history of the world, God's actual voice could be heard coming from tiny human vocal chords.

Today, however, that same kind of prophetic precision falls flat. In fact, many have undertaken what I call ”the dating game”—a half-baked attempt to pinpoint the day Christ will return. All of these predictions are made, mind you, in spite of the fact that Jesus Himself said that only the Father knows when that event will occur (Matthew 24:36).

Guard against setting dates and don't follow those who do. Remember Y2K? We were told all the computers would crash and burn. Everything would grind to a halt. Nothing happened. I know people who based their ministry on that false prediction. Some even wrote books about it. I confess...I was tempted to write the authors and say, ”Hey, how's your book selling...now that it's January 2?” Don't set dates. Don't think someone's teaching is ”deep” because he or she predicts the exact time of Christ's coming. Jesus said, ”It is not for you to know” (Acts 1:7 NASB). Only the Father knows. Never forget that!

Prophets like Isaiah were not rookies who carried out hit-or-miss pre-game chapel programs for a few teams in Judah. No, they were the real deal, sent and anointed by God to be trusted and revered.

They had prophetic momentum.