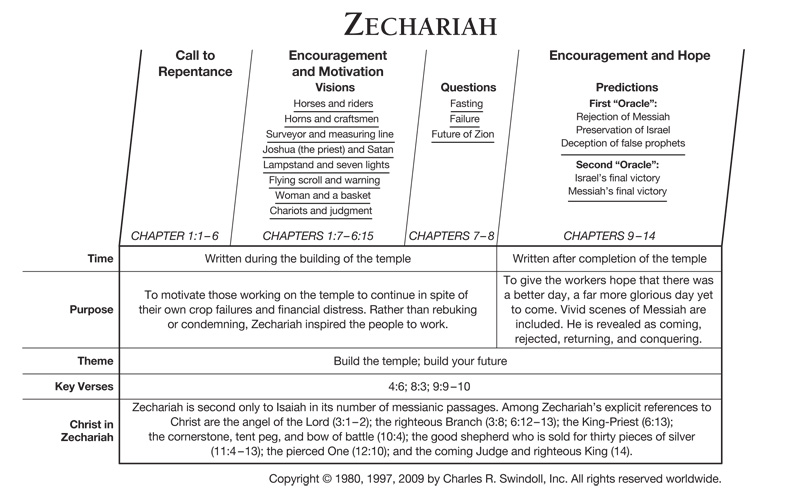 Grandson of the priest Iddo, Zechariah prophesied to the people of Judah after they returned from their seventy years of exile in Babylon (Zechariah 1:1; Nehemiah 12:1, 4, 16). Zechariah's grandfather returned from Babylon, his young grandson in tow, with the first group of Israelites allowed back, in 538 BC under the decree of Cyrus, king of Persia. Because of his family lineage, Zechariah was a priest in addition to a prophet. He, therefore, would have had an intimate familiarity with the worship practices of the Jews, even if he had never served in a completed temple. As a “young man” at the time of his first prophecies (Zechariah 2:4), his life more than likely extended into the reign of Xerxes I (485–465 BC), the king best known in the Bible for making Esther the queen of Persia (Esther 1:1).1

Zechariah, a young man, especially when compared to his contemporary Haggai, came alongside the older prophet to deliver messages from the Lord to the Jewish remnant recently returned from Babylon. While Haggai's overall message had more of a cautionary tone to it (pointing out the Jews' sin and self-focus), Zechariah emphasized a tone of encouragement to the struggling Israelites trying to rebuild their temple.

Zechariah's dated visions and messages in chapters 1–8 all take place in the same general time period as Haggai's, beginning in October–November 520 BC with a call for the people of Judah to repent (Zechariah 1:1). He then received eight visions on the restless night of February 15, 519 BC (1:7), followed by four messages that he preached on December 7, 518 BC (7:1). Though his final messages in chapters 9–14 go undated, the mention of Greece in 9:13 suggests the prophecies came much later in his life, presumably sometime in the 480s BC, before Ezra (458 BC) and Nehemiah (444 BC) arrived to again revitalize the Jewish people.

WHY IS ZECHARIAH SO IMPORTANT?

The book of Zechariah contains the clearest and the largest number of messianic (about the Messiah) passages among the Minor Prophets. In that respect, it's possible to think of the book of Zechariah as a kind of miniature book of Isaiah. Zechariah pictures Christ in both His first coming (Zechariah 9:9) and His second coming (9:10–10:12). Jesus will come, according to Zechariah, as Saviour, Judge, and ultimately, as the righteous King ruling His people from Jerusalem (14:8–9).

WHAT'S THE BIG IDEA IN ZECHARIAH?

Meaning “Yahweh remembers,” Zechariah's name was appropriate to the purpose of his prophecies.2 His book brims over with the hope that God would remember His promises to His people, even after all the time they spent outside the land. The prophet used a simple structure of eight visions (Zechariah 1:1–6:15), four messages (7:1–8:23), and two oracles (9:1–14:21) to anticipate the completion of the temple and, ultimately, the future reign of the Messiah from Jerusalem. Like many of the prophets, Zechariah saw isolated snapshots of the future; therefore, certain events that seem to occur one right after the other in Zechariah's prophecy actually often have generations or even millennia between them.

For a people newly returned from exile, Zechariah provided specific prophecy about their immediate and distant future—no doubt a great encouragement. Their nation would still be judged for sin (5:1–11), but they would also be cleansed and restored (3:1–10), and God would rebuild His people (1:7–17). Zechariah concluded his book by looking into the distant future, first at the rejection of the Messiah by Israel (9:1–11:17), and then at His eventual reign when Israel will finally be delivered (12:1–14:21).

Have you struggled with discouragement? Read Zechariah. While the book contains its share of judgments on the people of Judah and beyond, it overflows with hope in the future reign of the Lord over His people. It's easy to get caught up in the oftentimes-depressing events of day-to-day life, to lose our perspective and live as people without hope. The book of Zechariah serves as a correction for that tendency in our lives. We have a hope that is sure. How refreshing!

Find resources in the book of Zechariah in our resource library.