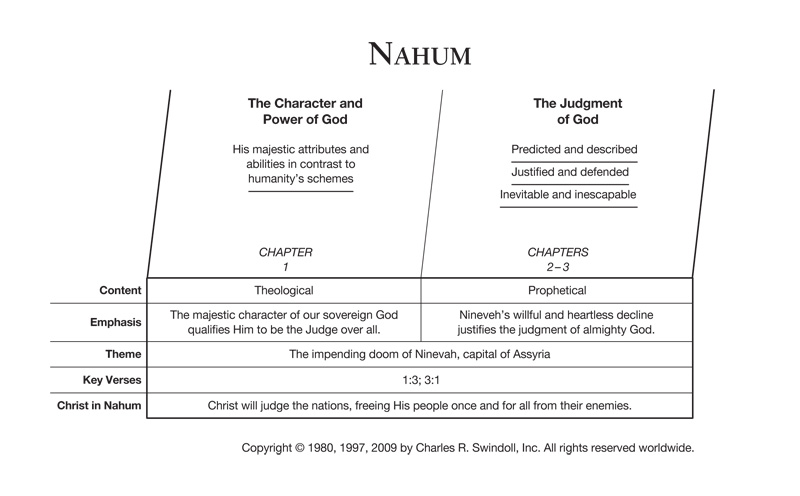 The only mention in Scripture of Nahum the Elkoshite occurs in the first verse of his own book. While scholars have proposed a number of theories about Nahum's hometown, Elkosh, the best option identifies it with a city in southern Judah that later came to be known as Elcesi, near where the prophet Micah lived. Nahum's prophecy against the city of Nineveh would have been significant for the people of Judah, who would have needed encouragement in the face of the terrifying power of the Assyrian Empire.

The book of Nahum mentions the recent fall of No-amon, or Thebes, which occurred in 663 BC (Nahum 3:8), as well as the coming destruction of Nineveh, which happened in 612 BC (1:1; 3:11–15). But when, during this more than 50-year period, did Nahum preach? The Assyrian Empire, which had its capital at Nineveh, was at its most powerful in the first half of this period, having a stranglehold on Judah during King Manesseh's reign (2 Chronicles 33:10–13). Also, while the book of Nahum mentions the destruction of Thebes, it does not mention its reconstruction, which took place in 654 BC. This leads us to date Nahum's prophecy between the years of 663 and 654 BC.

Nahum preached during the reign of King Manesseh, one of the most evil kings in Judah's long history, a man who needed the pain of his own experience to teach him the lessons of being a good king. Commentator J. Barton Payne suggests that Manasseh's great conversion took place late in his reign, around 648 BC, a mere half-dozen years before his death. That means Nahum preached during the darkest period in Judah's history to that point, a time filled with idolatry of all kinds in a nation that had completely turned its back on God. The Lord's willingness to send Nahum, whose name means “comfort,” into such a hopeless situation evidences His unrelenting and overwhelming grace.

WHY IS NAHUM SO IMPORTANT?

Nahum's singular focus on the impending judgment of Nineveh offers a continuation of the story that began in Jonah. Sometime around 760 BC, God sent Jonah to Nineveh to preach repentance and hope to the Assyrian people, a message they heard and adopted—at least for a time. One hundred years later, during the time of Nahum, the Assyrians had returned to their bullish ways, conquering the northern kingdom of Israel and lording their power over Judah in the south (2 Kings 17:1–6; 18:13–19:37). Jonah failed to realize what Nahum reminded the people of Judah: God's justice is always right and always sure. Should He choose to grant mercy for a time, that good gift will not compromise the Lord's ultimate sense of justice for all in the end.

WHAT'S THE BIG IDEA IN NAHUM?

After allowing approximately two hundred years of powerful Assyrian kings and rulers, God announced through Nahum His plans to judge the city of Nineveh. While the book as a whole clearly shows God's concern over sin, His willingness to punish those guilty of wickedness, and His power to carry out His desire for judgment, it also contains rays of hope shining through the darkness. Most significant, the people of Judah would have immediately taken hope in the idea that Nineveh, their primary oppressor for generations, would soon come under judgment from God. Also, a small but faithful remnant in an increasingly idolatrous Judah would have been comforted by declarations of God's slowness to anger (Nahum 1:3), His goodness and strength (1:7), and His restorative power (2:2).

No doubt we all have felt overwhelmed by the darkness both within ourselves and in our world. Nahum lived in a dark time, a time in which the faithful few must have wondered how long they would have to resist cultural and spiritual compromise.

Have you ever found your will to do what's right weakening as you became discouraged with what you saw in your life and in the world around you? The prophet Nahum reminds us of God's active hand, working even in the darkest of times to bring justice and hope throughout the world.

Find resources in the book of Nahum in our resource library.