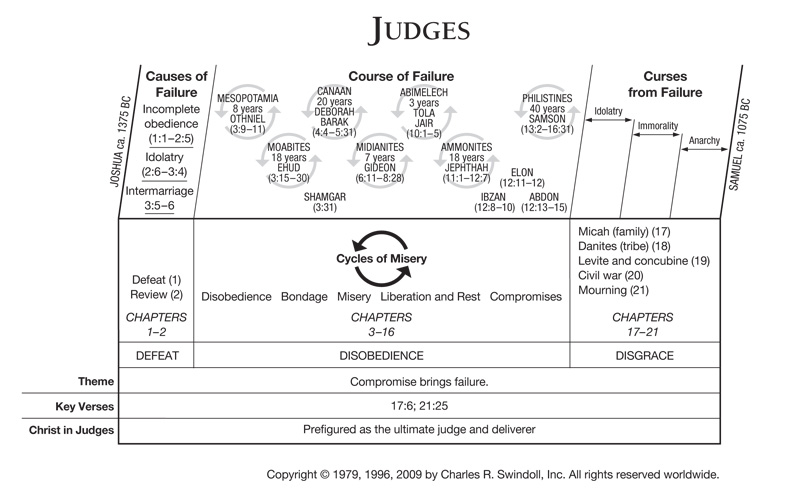 The text of Judges gives no indication as to who wrote the book, but Jewish tradition names the prophet Samuel as the author. The namesake of 1 and 2 Samuel, Samuel was the last of the judges, one of the special leaders whom God raised up during this time period to rescue His people. The judges did not oversee merely legal matters, as in our sense of the role; their tasks often included military and administrative authority as well.

We think about the judges as both a period of time and a book of the Bible. The period of the judges began after the death of Joshua in the early 14th century BC (Joshua 24:29) and continued until Saul was crowned king of Israel by the prophet Samuel in 1051 BC (1 Samuel 10:24). The book of Judges acts as the sequel to the book of Joshua, linked by comparable accounts of Joshua’s death (Joshua 24:29–31; Judges 2:6–9). Events within the book of Judges span the geographical breadth of the nation, happening in a variety of cities, towns, and battlefields. Scholars believe some of the judges ruled simultaneously in separate geographical regions. Attempts to calculate the exact amount of time covered in Judges are inconclusive, but generally, the book begins soon after the death of Joshua and ends in the years just before the entrance of Samuel onto the scene, a period of about three hundred years.

The contents of Judges were likely not written chronologically. The final few chapters (Judges 17–21) give an overview of the moral climate during those days and, rather than occurring after the period of the judges listed earlier in the book, they probably happened in and around the times of various judges mentioned in earlier chapters.

WHY IS JUDGES SO IMPORTANT?

The time of the judges brought about great apostasy in Israel. The nation underwent political and religious turmoil as the people tried to possess those parts of the land that had not yet been fully conquered. The tribes fought among themselves, as well, nearly wiping out the tribes of Manasseh (Judges 12) and Benjamin (20–21). The pattern of behaviour in the book of Judges is clear: the people rebelled through idolatry and disbelief, God brought judgment through foreign oppression, God raised up a deliverer—or judge, and the people repented and turned back to God. When the people fell back into sin, the cycle started over again.

Ironically, in this book we meet many heroes of faith: Othniel, Gideon, Samson, Shamgar, Deborah, Jephthah, Ehud…flawed individuals who answered God’s call to deliver the Israelites in sometimes dramatic form. The book includes many of the most graphic, violent, and disturbing scenes in all Scripture—some in the name of righteousness, others in the name of evil.

WHAT'S THE BIG IDEA IN JUDGES?

The primary message of Judges is that God will not allow sin to go unpunished. As Exodus established, Israel was God’s people—He was their King. They had forsaken the covenant established at Mount Sinai. In Judges, He disciplined them for following other gods, disobeying His sacrificial laws, engaging in blatant immorality, and descending into anarchy at times. Yet because they were His people, He listened to their cries for mercy and raised up leaders to deliver them. Unfortunately, even these godly individuals did not wield sufficient influence to change the nation’s direction. The people’s inability to resist sinful Canaanite influences eventually revealed their desire for a centralized monarchy, led by a righteous king whom God would choose as His intermediary.

Memory is a gift. Remembering the past teaches us countless lessons about how to live today. The Israelites forgot. They did not remember the miraculous events that brought them to their land or the covenant that united them to their God. But God did not forget His covenant—and because of His great love for His people, He disciplined His sinful children so that they might return to Him.

Have you forgotten the great works God has done in your life? Perhaps your difficult circumstances are overpowering your faith. Do you feel as if He is disciplining you right now? Know that He disciplines those He loves (Hebrews 12:5–11). Return to Him. Remember, trust, and obey. He is waiting with open arms.

Find resources in the book of Judges in our resource library.