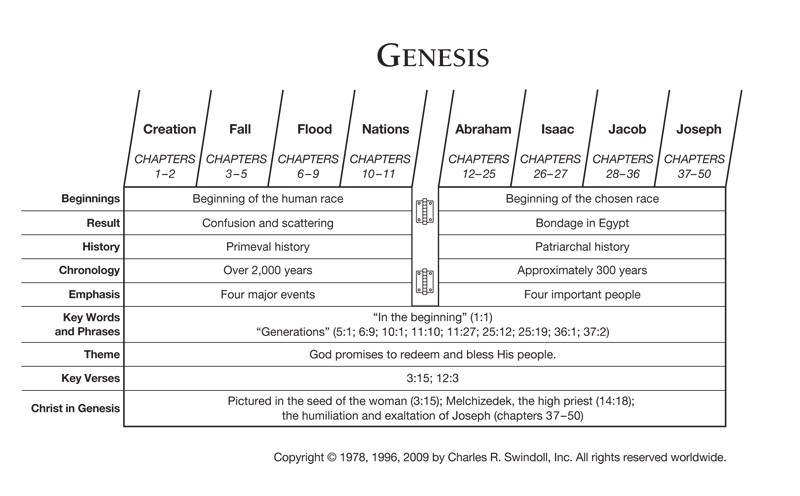 Old Testament books seldom include a byline. So we look to outside sources to discover authorship. Jewish tradition and other biblical authors name Moses, the prophet and deliverer of Israel, as the author of the entire Pentateuch—the first five books of the Old Testament. His education in the courts of Egypt (Acts 7:22) and his close communion with Yahweh—the Hebrew name for God—support this premise. Jesus Himself confirmed Moses' authorship (John 5:45–47), as did the scribes and Pharisees of His time (Matthew 19:7; 22:24).

From the Hebrew word toledoth, the first book of the Bible is titled “Genesis” in the Septuagint, the Greek translation of the Jewish Scriptures. The word means “beginning, origin,”1 or generation and is a foundational theme that winds throughout the book.

Moses wrote Genesis for the people of Israel, whom he led out of slavery in Egypt back to the land of their forefathers. Genesis provides a history of those forefathers—their origins, their journeys, and their covenants with God. Because the events contained in the rest of the Pentateuch are responses to the promises of God found in Genesis, such a history of God's interaction with their ancestors would have provided encouragement and inspiration to the former slaves seeking freedom and prosperity in the Promised Land.

The first 11 chapters of Genesis paint the early history of the human race in broad strokes. After the great flood, the focus narrows to God's dealings with one family living in Mesopotamia, a family headed by Abram, later called Abraham. From the Euphrates River (in modern-day Iraq) over to what is now Syria, events move south into Canaan (modern-day Israel) and Egypt.

Genesis covers the most extensive period of time in all of Scripture, longer than the other books in the Bible combined! While the ancient history recounted in the first eleven chapters gives no indication of time span, Abram's story begins around 2091 BC (Genesis 12:1), and the book ends with Joseph's death in Egypt around 1805 BC (50:26).

WHY IS GENESIS SO IMPORTANT?

To the original readers of Genesis, the book was valued as a history of their people. It told them the story of how God created the world and dealt with all humanity until He initiated a personal relationship with their forefather Abraham. Genesis revealed to them the eternal promises God made to Abraham, Isaac, and Jacob—promises extending to their descendants. It provided comfort and hope for the downtrodden Hebrews as they waited to return to their “promised land.”

For later readers, Genesis offers a thorough background to the rest of the Bible. Here we learn ancient history and geography and are introduced to significant people and events found later in the Bible. God also reveals many facets of His nature through His dealings with people. We learn of the origin of sin, of its destructive effect on humanity, and of God's plan to atone for that sin through a future Son of the people of Israel (Genesis 3:15; 22:18; 49:10).

WHAT'S THE BIG IDEA IN GENESIS?

The Bible is divided into two major parts, the Old and New Testaments. Testament is another word for covenant. Covenants figure prominently into the story of Genesis, for they help define God's relationship with His people at various times. Sin broke the perfect peace between God and humanity (Genesis 3) and instead of enjoying the blessing God intended, humanity was burdened with the curse. But God established His plan for redemption and blessing through covenants, first with Abraham (Genesis 12:1–5), reaffirmed with Isaac (26:1–35), then with Jacob (28:1–22). These promises applied to the Israelites in Egypt and to later generations. Genesis sets the stage for the rest of God's plan to redeem the world through His Son, Jesus Christ.

It's easy to get lost in the genealogies and accounts in Genesis without seeing the big picture. Keep God, not just the people, in mind as you read through the book. Consider His character qualities. If you were an Israelite just released from slavery and reading this for the first time, would you marvel at God's power over creation? Or His anger over sin? Or the way He fulfilled His promises to everyone? Awareness of each of these characteristics should evoke worship…and hope. Remember that the Lord is strong, faithful, and just. And His desire to bless His creation will one day be fully realized.

Find resources in the book of Genesis in our resource library.