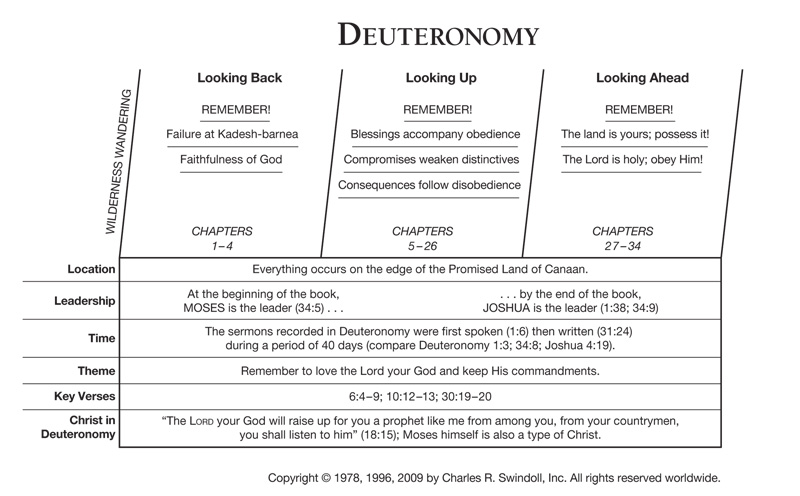 Deuteronomy means “second law,” a term mistakenly derived from the Hebrew word mishneh in Deuteronomy 17:18. In that context, Moses simply commands the king to make a “copy of the law.”1 But Deuteronomy does something more than give a simple copy of the Law. The book offers a restatement of the Law for a new generation, rather than a mere copy of what had gone before. Deuteronomy records this “second law”—namely Moses' series of sermons in which he restated God's commands originally given to the Israelites some 40 years earlier in Exodus and Leviticus.

“These are the words which Moses spoke to all Israel,” says Deuteronomy 1:1. Mosaic authorship of this book finds the usual support from Jewish tradition (with the entire Pentateuch) but also from within the biblical text. Several times, Deuteronomy asserts Moses as author (1:1; 4:44; 29:1). Speaking to Joshua, Moses' successor, the Lord referred to this “book of the law” as that which Moses commanded (Joshua 1:8). And when future Old Testament and New Testament writers quoted from Deuteronomy, they often referred to it as originating with Moses (1 Kings 2:3; 2 Kings 14:6; Ezra 3:2; Nehemiah 1:7; Malachi 4:4; Matthew 19:7; Luke 20:28).

Some obvious editorial changes were made to the text sometime after Moses recorded the bulk of it. For instance, he could not have written the final chapter, which dealt with his death. However, these and other small changes do not affect the generally accepted authorship of Moses.

Deuteronomy was written around 1406 BC, at the end of the 40 years of wandering endured by the nation of Israel. At the time, the people were camped on the east side of the Jordan River, on the plains of Moab, across from the city of Jericho (Deuteronomy 1:1; 29:1). They were on the verge of entering the land that had been promised centuries earlier to their forefathers (Genesis 12:1, 6-9). The children who had left Egypt were now adults, ready to conquer and settle the Promised Land. Before that could happen, the Lord reiterated through Moses His covenant with them.

WHY IS DEUTERONOMY SO IMPORTANT?

Moses addressed his words to “all Israel” at least 12 times. This phrase emphasized the nation's unity, initiated by their covenant with God at Mount Sinai and forged in the wilderness. In the midst of widespread polytheism, Israel was distinctive in that they worshiped one God, Yahweh. Their God was totally unique; there was none other like Him among all the “gods” of the nations surrounding them. Deuteronomy 6:4 codifies this belief in the Shema, the basic confession of faith in Judaism even today. “Hear, O Israel! The LORD [Yahweh] is our God, the LORD [Yahweh] is one!”

Deuteronomy also restates the Ten Commandments and many other laws given in Exodus and Leviticus. The book delivered to Israel God's instructions on how to live a blessed life in the Promised Land. Chapters 27 and 28 specify the blessings of obedience and the curses of disobedience.

WHAT'S THE BIG IDEA IN DEUTERONOMY?

Unlike the unconditional covenant God made with Abraham, the covenant between Yahweh and Israel was bilateral—a two-way street. God would keep His promise to bless the nation if the people remained faithful. The adult Israelites were too young to have participated in the first covenant ceremony at Mount Sinai. Therefore, Moses reviewed the Law at the doorstep to the Promised Land, urging this new generation to re-covenant with Yahweh, to recommit themselves to His ways.

In Moses' conclusion, he entreated the people,

“I have set before you life and death, the blessing and the curse. So choose life in order that you may live, you and your descendants, by loving the Lord your God, by obeying His voice, and by holding fast to Him; for this is your life and the length of your days.” (Deuteronomy 30:19-20)

“This” in verse 20 refers to loving the Lord your God, obeying, and holding fast to Him. That is life! Our relationship with God is to be marked by faithfulness, loyalty, love, and devotion. Think of an ideal marriage—that's the picture of how God wants us to cling to Him (Ephesians 5:28–32).

How closely do you cling to God? Pray and recommit your heart to that all-important relationship with Him.

Find resources in the book of Deuteronomy in our resource library.