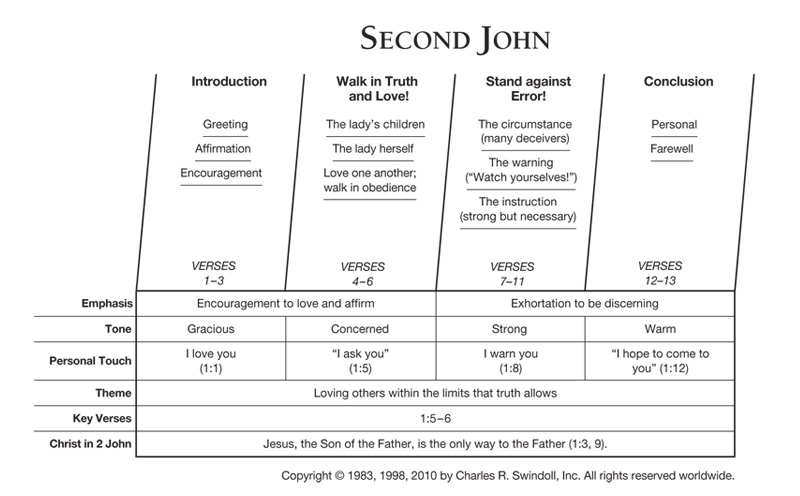 John did not identify himself by name in this letter, but he did adopt the term “elder” for himself (2 John 1:1). There has been some debate about whether an author named John the Elder wrote this letter (as well as 3 John, which is addressed the same way) or if John the Apostle was using a different title for himself. However, the earliest church tradition from the second century on testified in unison that this letter and its companion, 3 John, were written by the apostle, not by a mysterious and unknown elder. In fact, an apostle using the term “elder” for himself was not at all unprecedented—Peter did that very thing in his first epistle (1 Peter 5:1).

John offered little in the way of detail in the short letter we call 2 John. Nothing in the circumstances John discussed in the letter would lead a reader of the time to think that it did not go to the same churches that received 1 John. The apostle addressed the letter “to the chosen lady and her children,” a mysterious phrase that has been much debated (2 John 1:1). It either refers to an actual woman or serves as a metaphor for a church. In either case, whether to a smaller family group joined by blood or to a larger one joined by confession, the application of the letter should remain unchanged. With this letter's thematic similarity to 1 John, it is best to suggest that John wrote from Patmos in about AD 90.

WHY IS SECOND JOHN SO IMPORTANT?

Second John makes clear what our position should be regarding the enemies of the truth. Whereas 1 John focuses on our fellowship with God, 2 John focuses on protecting our fellowship from those who teach falsehood. The apostle went so far as to warn his readers against inviting false teachers into the house or even offering them a greeting (2 John 1:10). Such practices align the believer with the evildoer, and John was keen on keeping the believers pure from the stain of falsehood and heresy.

WHAT'S THE BIG IDEA IN 2 JOHN?

John began his second epistle proclaiming his love for “the chosen lady and her children,” a love he shared with those who know the truth (2 John 1:1). From the reports he had received, he understood that these believers were following the teachings of Christ. He summed up this kind of lifestyle in the exhortation to “love one another” (1:5), a clear reference to the great commandments of Jesus—to love God and love your neighbour (Matthew 22:36-40; John 13:34).

In other words, those who walk in the truth should be people who love others. But they should be cautious whom they love. Deceivers and false teachers had infiltrated the church—people who taught falsehoods about the person of Jesus, teaching that He was not truly a man but only appeared to be one. This early heresy, called Docetism, required the strongest possible response from John. So the apostle warned the true believers away from these false teachers. John's encouragement, then, was not simply to love but to love others within the limits that truth allows.

John's strong encouragement to the believers in 2 John involved loving one another. However, John did not leave love undefined but described it as walking “according to His commandments” (2 John 1:6). This echoes the teaching of Jesus in John's gospel, where the Lord told His followers, “If you love Me, you will keep My commandments” (John 14:15).

Our love is dependent on our obedience. When we don't obey, we don't love. Often we get in the mindset that our obedience to God affects only ourselves. But that simply is not true. Our actions, whether obedient or disobedient, have ripple effects far beyond our own limited vision of a circumstance.

Consider your own life. In what ways might your obedience or disobedience impact those in your immediate circle of relationships? Second John reminds us not only of the dangers of falling away from the truth but also of the importance of making obedience a priority in our lives—for ourselves and for those most important to us.

Find resources in the book of Second John in our resource library.