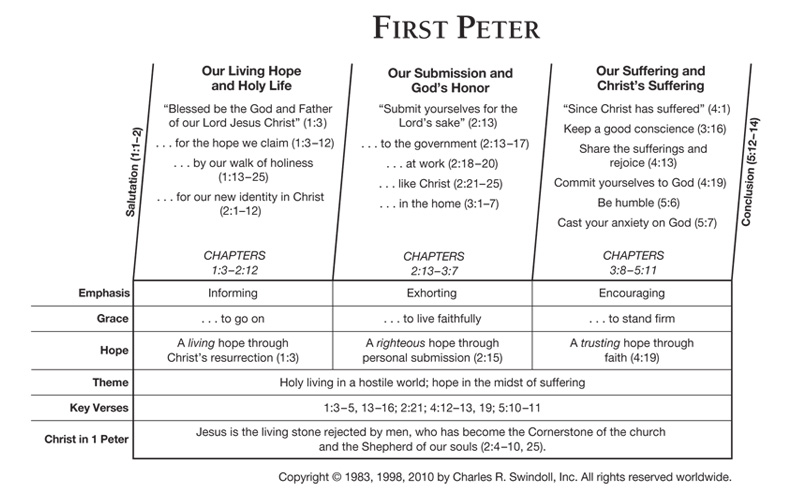 The first word of this epistle, Peter, identifies the author, who called himself “an apostle of Jesus Christ” (1 Peter 1:1). He wrote this letter to a group of Christians scattered throughout the northern areas of Asia Minor, where he may have previously preached the gospel.

Peter wrote to a group of people that probably included both Jews and Gentiles. The apostle addressed the letter's recipients as “aliens” (1:1), a word indicating that Peter was speaking not just to Jews or just to Gentiles but to Christians who were living their lives in such a way that they would have stood out as aliens among the surrounding culture.

In this letter, Peter spoke much about persecution, which anticipated the persecution he and other Christians would endure in the final years of Nero's reign. At the time he wrote, Peter had not yet been arrested, an event that would lead to his martyrdom around AD 66-68. First Peter 5:13 indicates that Peter sent greetings from the local church—calling it “Babylon”—but it's most likely that the apostle was writing in a common metaphor there. He used the name of the ancient Mesopotamian city as a stand-in for Rome, the modern city that, like Babylon, gave itself over to idol worship and false gods. While the fact is not recorded in the Bible, Peter has long been thought to have spent his final years serving the church in Rome. Based on the numerous references to suffering and persecution in this letter, Peter likely wrote in AD 64, just as the persecution of Christians under Nero was ramping up.

WHY IS FIRST PETER SO IMPORTANT?

First Peter focuses on the importance of believers bearing up under unjust suffering yet continuing to live well (1 Peter 2:20). In this way, 1 Peter might be called the Job of the New Testament, providing encouragement for the true believer to continue on in the way that Jesus has laid out for all His followers. The endurance Peter called these believers to is similar to Job's, a man who suffered despite his righteousness. Peter maintained that this was the kind of true perseverance that God expects from His people.

WHAT'S THE BIG IDEA IN 1 PETER?

Living in close proximity to Jesus Christ for more than three years had provided the Apostle Peter the best possible example of what it looked like to live in holiness amid a hostile world. More than any other man who walked the earth, Jesus modelled that lifestyle. Peter therefore pointed his readers in the best possible direction, to Jesus Himself. The apostle called Christians to “sanctify Christ as Lord” in their hearts, that believers might live and act as Jesus desires during their short time here on earth (1 Peter 3:14-18). This would include submission to authority—even unjust authority—in the government, in the home, and in the workplace. Jesus becomes the focal point for ordering one's life in the midst of trials and tribulations. By rooting their perseverance in the person and work of Christ, believers can always cling to hope in the midst of suffering.

Unjust or unforeseen suffering is one of the great problems that grips the hearts of people today. We struggle with frustration, anger, and uncertainty when trials strange and unexpected land on our doorsteps. Too often in those most difficult moments of our lives, confusion reigns while contentment wanes; questions arise while prayer subsides.

How do you react when suffering comes? Many crumble at the mere thought of another pain or trial. Others rise to the occasion. Most of us are probably somewhere in between. Peter's encouragement to his Christian readers is one of perseverance in faith. It isn't enough for us to simply get up every morning and trudge through each day; neither is it advisable to paste a smile on our faces and ignore troubles. Instead, the lesson of 1 Peter is to push through the troubles, recognizing their temporary presence in our lives while walking in holiness and hope as people of faith.

So press on! It is in the darkest times that our collective light shines brightest.

Find resources in the book of First Peter in our resource library.