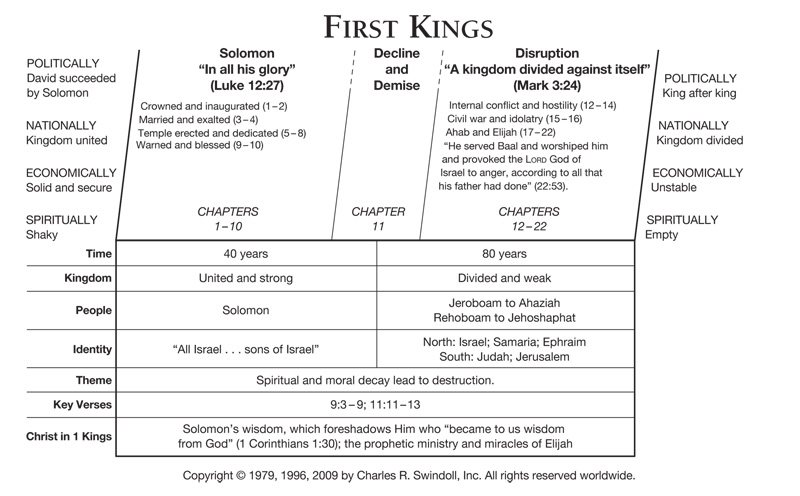 Like the books of 1 and 2 Samuel, 1 and 2 Kings originally were one book. In the Hebrew Bible the book of Kings continued the narrative started in Samuel. The Septuagint separated them into two parts. We derive our English title “Kings” from Jerome's Vulgate, the Latin translation of the Bible.

No one knows the author of 1 and 2 Kings, though some commentators have suggested Ezra, Ezekiel, and Jeremiah as possible authors. Because the entire work encompasses a time period of more than four hundred years, several source materials were used to compile the records. Certain clues such as literary styles, themes woven throughout the book, and the nature of material used point to a single compiler or author rather than multiple compilers or authors. This person assembled the manuscript while God's people were in exile at Babylon (see 2 Kings). But he didn't complete the work until the Babylonians released King Jehoiachin after 37 years in prison (560 BC), most likely completing it within another 20 years.1

First Kings opens describing the final days of King David (around 971 BC) and the conspiracies surrounding his succession. When David died (1 Kings 2:10), Solomon ascended the throne and established himself as a strong and wise leader. In the early years of Solomon's reign, Israel experienced its “glory days.” Its influence, economy, and military power enjoyed little opposition; its neighbours posed no strong military threat.

Shortly after Solomon's death in 931 BC (1 Kings 11:43), the kingdom was divided into northern (Israel) and southern (Judah) entities. First Kings follows the history of this divided kingdom through the year 853 BC.

WHY IS FIRST KINGS SO IMPORTANT?

First Kings reveals Solomon's relationship with Yahweh, emphasizing Solomon's divinely given wisdom and wealth. Solomon's reputation reached far beyond Israel's borders to modern-day Yemen, the queen of Sheba's likely home (1 Kings 10:1–13). Solomon's numerous marriages and extensive harem are the stuff of legends, but they led to his wandering faith in later years. Solomon did, however, build the temple, God's permanent dwelling place among His people.

WHAT'S THE BIG IDEA IN 1 KINGS?

First Kings was written “to record history but, more important, to teach the lessons of history.”2 As with other historical books in the Old Testament, the history recorded here was meant to preserve not just important events but spiritual truths learned through those events.

In the books of 1 and 2 Kings, each king is evaluated by “his reaction toward his covenantal responsibility to the Law of the LORD. That was the acid test of whether he 'did evil' or 'that which was right in the eyes of the LORD.'”3 Readers will notice scathing rebukes of some kings—reports not typically recorded by purely historical writers. In addition to the kings, the prophets figure heavily in this book. They are God's spokesmen, proclaiming His word to mostly hard-hearted rulers. It is through the prophets' eyes—always connecting the nation's fortune with its kings' faithfulness (or lack thereof)—that we learn the history of Israel and Judah.

Solomon was known as the wisest man of his day. He was arguably the wealthiest man of his time. He enjoyed God's favour in many ways, yet his legacy is tarnished by the faithlessness he displayed in his later years. In direct contradiction to God's command for a king not to “multiply wives” (Deuteronomy 17:17), Solomon married many foreign women. First Kings laments, “When Solomon was old, his wives turned his heart away after other gods” (11:4). Solomon began to rely on his fortune, his military might, and his political alliances instead of the God who gave all of those blessings to him. He focused on the gifts, forgetting the Giver.

How often do you do the same? Are there any direct commands from God you are ignoring? Today, take time to recall the blessings in your life, and then thank the Lord for them. Rely on Him, not your possessions or position, as your source of strength and significance.

Some trust in chariots and some in horses, but we trust in the name of the LORD our God. (Psalm 20:7 NIV)

Find resources in the book of First Kings in our resource library.