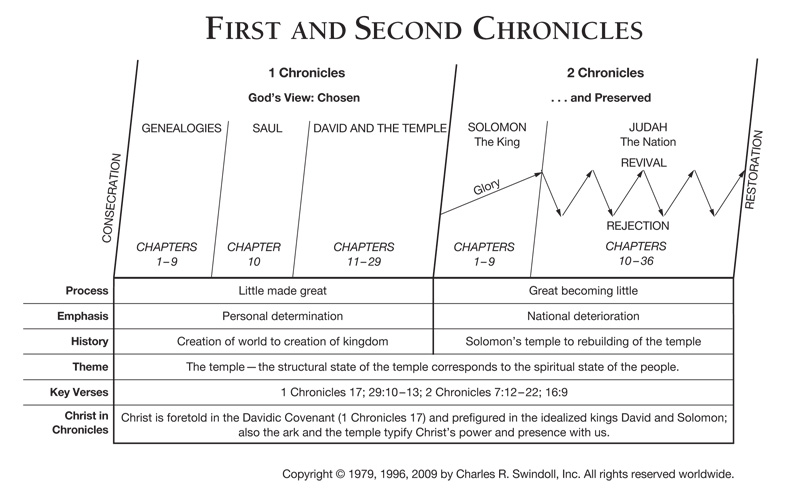 “The chronicler,” as scholars have long referred to the author of this book, is anonymous. Jewish tradition speculates that Ezra could have written 1 and 2 Chronicles, which—like Samuel and Kings—originally formed one work. But nothing within the text provides a definitive clue as to the compiler of the material.

Several indications throughout the book reveal the author's reliance on a variety of source materials—“annals,” “books,” and “records”—which are cited as dependable historical documentation. “Whoever the author was, he was a meticulous historian who carefully utilized official and unofficial documents.”1

The time frame covered in 1 Chronicles mirrors parts of 2 Samuel and 1 Kings. The chronicler focused on David's reign in 1 Chronicles, including and omitting different events recorded in the other biblical histories, so that his document recorded those events significant to his purpose. For instance, 1 Chronicles does not include David's adultery with Bathsheba (2 Samuel 11), which was a well-known fact even before the chronicler began his work, and so it did not bear repeating.

Chronicles was most likely written during the time of Ezra or Nehemiah, while the Jews were dispersed throughout Persia, some having returned to Israel. Archaeological evidence supports this premise. “Fragments of an actual manuscript of Chronicles found at Qumran makes a date in the Persian period (538–333 BC) almost certain.”2

WHY IS FIRST CHRONICLES SO IMPORTANT?

Readers will note the extensive space devoted to genealogies. Why are these family lists so common in Chronicles? Scholars say that genealogies serve many purposes, among them

To demonstrate the legitimacy of a person or family's claim to a particular role or rank…to preserve the purity of the chosen people and /or its priesthood…to affirm the continuity of the people of God despite expulsion from the Promised Land.3

In Chronicles, the history of Israel is told through a priestly perspective. The chronicler devoted significant attention to proper worship of Yahweh and adherence to the regulations of His Law. The author included David's decisions on the proper manner in which to undertake moving the Ark of the Covenant (1 Chronicles 13, 15–16) and detailed descriptions of its return to Jerusalem. The chronicler even highlighted one of David's psalms (16:8–36). We read the story of how David purchased the threshing floor of Ornan the Jebusite, which he then designated as the future site of the temple (21:15–30). Though David desired to build the temple, God revealed to him that David's son Solomon would have that honour (17:1–14).

WHAT'S THE BIG IDEA IN 1 CHRONICLES?

Why do we need the books of 1–2 Chronicles when we already have the history of 2 Samuel and 1–2 Kings? Just as the Gospels of Matthew, Mark, Luke, and John each offer a different perspective on the life of Jesus, so the books of Chronicles present Israel's history with a purpose different than the other historical books. The books of 2 Samuel and 1–2 Kings reveal the monarchies of Israel and Judah—in particular the sins of the nations that resulted in the exile. But the books of Chronicles, written after the time of the exile, focus on those elements of history that God wanted the returning Jews to meditate upon: obedience that results in God's blessing, the priority of the temple and priesthood, and the unconditional promises to the house of David.

David's prayer in 1 Chronicles 29:10–19 summarizes the themes the chronicler wished to communicate: glory to God, gratitude for gifting David's family with leadership of the nation, and the desire that David's descendants continue to devote themselves to God. Remaining faithful to God would reap blessing.

When the book was written, David's descendants no longer ruled as monarchs over Israel. But the chronicler desired the people to remember the royal Davidic lineage, for God had promised a future ruler would rise from that line. After the 70-year exile in Babylon, Jewish political and social power resided more with the religious rather than political rulers. Telling Israel's history through a priestly and kingly lens was intended to prepare the people for a future Messiah.

Read David's magnificent prayer in 1 Chronicles 29. Consider your own spiritual heritage. Would you like to model such godly strength and character as his to your own children? What steps do you need to take in order to echo truthfully David's attitude in verse 11, “Yours, O LORD, is the greatness and the power and the glory and the majesty and the splendor, for everything in heaven and earth is yours” (NIV)?

Knowing that He tests the heart and is pleased with integrity (1 Chronicles 29:17), ask the Spirit to fill you daily and guide your steps that future generations might be blessed.

Find resources in the book of First Chronicles in our resource library.