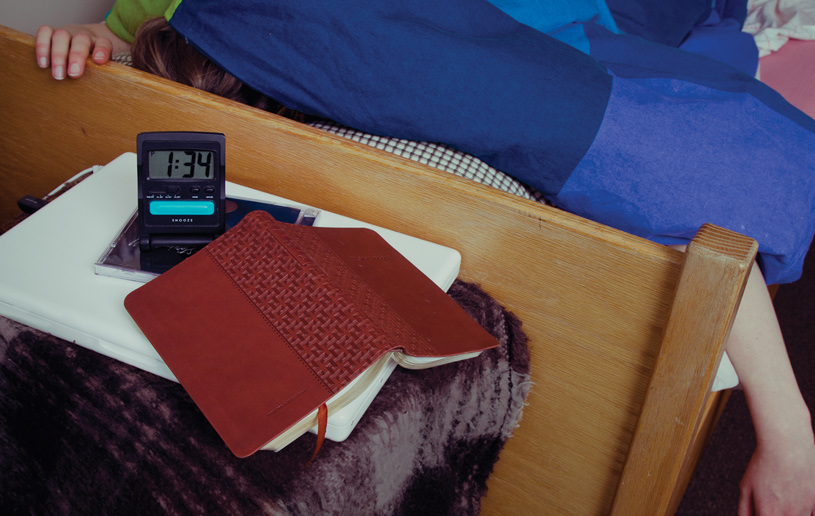 For you know that we dealt with each of you as a father deals with his own children, encouraging, comforting and urging you to live lives worthy of God, who calls you into his kingdom and glory. And we also thank God continually because, when you received the word of God, which you heard from us, you accepted it not as a human word, but as it actually is, the word of God, which is indeed at work in you who believe. (1 Thessalonians 2:11-13 NIV)

Well, it's finally done. I can't believe the year blew by so fast! Lots of things have changed—I wonder if my friends from high school would even recognize me now…

The summer after 12th grade was a blur. Once I got the acceptance letter to university, I knew everything would be different and all I could think about was saving money so I could live in the dorms. Work, work, work. I didn't see my friends much, but my parents insisted I take weekends off so I could go to church with them on Sundays and spend some time doing something other than my job. I guess that was a good idea, even though I know it cost me overtime hours. They made up for it by covering the rest of my dorm fees, which was only fair, since it was their idea for me to not work weekends in the first place.

September arrived like a storm. The dorms were open and students were coming in from everywhere, it was a little overwhelming at first. My parents helped me lug my stuff to my room and took me out for dinner before they left. I remember Mom crying a lot and Dad reminding, “Don't forget where you come from son and don't forget to call.” He told me that they would always love me and trust me to be faithful to God now that I'm away from home. That was big news and yet, I can't honestly say I knew what he meant. I felt some sadness as they drove away but I was also so excited! Wow, now that I look back, how many times did I call? Maybe six times all year? Wow.

The first call home wasn't much fun. Maybe that's why I didn't call too much? It was awesome to hear Mom's voice and about my brother's football team, but once Dad got on the phone, it was all business. Mom had asked me about church and I managed to get off the topic pretty quick. Dad wasn't so easy. I could hear the lingering tone of disappointment but I don't think he was angry. More like sad. It's not like I was doing drugs or failing school! Every time I called, he brought it up. It was annoying more than anything but he was just being Dad.

I explained to him that I tried out a couple churches around the university and it was just too weird. One didn't have a band and sang all their songs by organ from a hymnal! The people there were really kind and had tons of food for visitors from the school but I didn't like the service at all. The other one played the same music as the one at home but no one said “Hi!” or talked to me. Well, the usher was nice, but that's it. After finally making the effort to get up early and take the bus to try out these two churches, I wasn't going to try anymore. Sunday mornings in dorm were quiet, the silence broken only by the groans of those with hangovers and the occasional shout from gamers racking up a new achievement. I liked sleeping in and my roommate was rarely around after his partying on Saturday night. It was different but I didn't mind it.

Now that I'm going home for the summer, I know Dad will expect me to go to church with them every Sunday. I am looking forward to seeing my family again but it will be strange to live at home after all the freedom I've had this year. I do miss some things: my mom's cooking, beating my brother at 21, Sunday afternoons at the lake…singing. Who would've thought I'd miss singing!? There were days in chemistry class I was so bored and I'd start humming only to realize the people around me were staring. Oops! I will miss the sleeping in though.

Our church at home is different…familiar…comfortable. I know people there and I know what to do. It's not weird like those other ones. Besides, I went to a couple of group meetings on campus and they were OK. I didn't leave my name or anything, but maybe next year I could look into it more. The thing is, without church, I didn't feel that different. I did some things that I never would have done at home and that made me think about why. I won't say that everything was always great, that I was happy to do those things, but I don't regret it either. Maybe I'll talk to Dad about it and see if I'm still all right in his eyes. After all, he did promise to always love me and trust me…