Why I Don't Ask "WWJD?" | Insight for Living Canada
Skip to main content 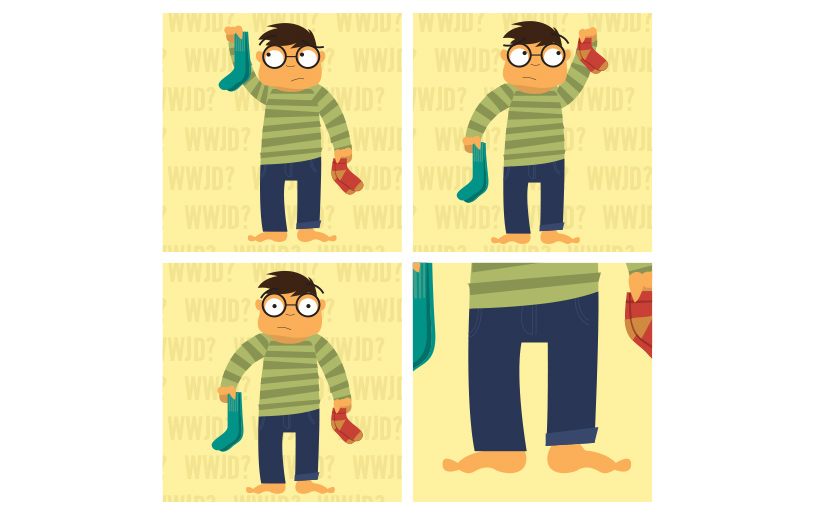 In the 1890s, a man by the name of Charles Sheldon penned the famous book In His Steps. The novel follows several fictitious people with various backgrounds in their quest to live ethical lives. In the story, Sheldon's characters are challenged with ethical situations where the overarching question is continually asked: “What Would Jesus Do?” It is from this novel the “WWJD?” acronym found on bracelets and fridge magnets is derived.

In recent decades this fad has resurged. Today, Christians ask themselves and fellow Christians “What would Jesus do?” when confronted with a situation in which they don't know what to do. I don't believe it is a good question for us to ask and here's why.

What would Jesus do? Probably not what we would do. This is because we're not Jesus. And, frankly, the last time I checked that's the point of Christianity. Jesus was God come to Earth to redeem it and us. He was, the Bible says, perfect. Sinless. Holy. He always made loving choices. He always did the right thing. He always had the right answer. More often than not, we don't do the right thing or have the right answer because we're imperfect, driven by our appetites and desires; we're selfish and wounded.

I believe it's presumptuous to think when faced with choices we would do what the perfect Man, the Son of God, would do. He was capable of miracles. He is unlimited. His options were far greater than ours. So in most situations we face today, because of His capabilities, we don't know what He would do. He might walk across the lake instead of driving around it. He might miraculously feed the multitudes instead of organizing a potluck. Maybe if I could do miracles I could ask, “WWJD?”

As well, we are culturally and historically removed from Jesus' day. The choices we have and the situations we deal with are technologically far more complex than then. Jesus walked or rode a donkey. I drive a car. He never owned a house. With the rising cost of gas and the great distances I have to travel I wonder about buying a cheaper car and continue commuting versus moving. I don't know what Jesus would do, or which car or computer He would buy or what kind of accommodations He might select. I can only guess.

Jesus also had a different mission than we do. He said, “As the Father has sent me, so send I you….” The only part that applies to us is the sending. The Father sent Jesus with a specific mission to accomplish. When He finished His mission He sent His disciples, including us, on a different mission—to make disciples of all nations. Jesus' purpose and mission in coming was what guided His choices and actions. His mission was why He went here and not there—why He did this and not that. If I am trying to decide whether to be a teacher or an engineer, asking what Jesus would do isn't going to help. Neither of those are what Jesus was called to be.

In trying to ask WWJD we also may find ourselves becoming immersed in Pharisaism and legalism. The quintessential example of this is the very same novel In His Steps. Among the things the people decide that Jesus would do is avoid all secular entertainment, such as sporting events. These types of decisions led the congregation into a new kind of Pharisaism, as they began insisting on doing and not doing things that aren't taught in Scriptures anywhere.

Asking the WWJD question causes us to speculate on what we imagine Jesus would do, rather than pointing us to the Scriptures. By meditating on Scripture, we have all the information we need to know about how God expects us to live.

WWJD? The prophet Micah had the best answer I know of when he said, “He has told you, O man, what is good; And what does the LORD require of you but to do justice, to love kindness, and to walk humbly with your God?” (Micah 6:8 NASB).

Follow that and you'll do what Jesus did. But it's difficult to fit onto a nifty bracelet or fridge magnet.