We want to see individual lives, and our country, transformed | Insight for Living Canada
Skip to main content

We want to see individual lives, and our country, transformed 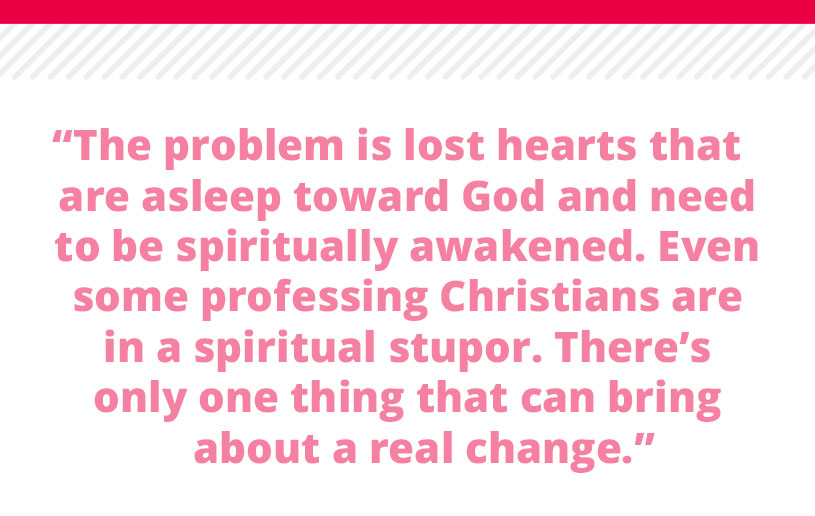 As a Christian in Canada are you concerned about the spiritual state of our country?

Recently I came across this statement, “In many ways, religion was becoming more formal and less personal... which led to lower church attendance. Christians were feeling complacent with their methods of worship, and some were disillusioned with how wealth and rationalism were dominating culture.”

This could be a snapshot of Christianity in Canada today. But it’s not. It’s a description of the spiritual condition of people in the early 1700s. Then something happened.

In the 1730s and 1740s, there was a Great Awakening that swept Europe, England, and the American colonies. It was a religious revival reacting against the increasing secularization of society and against the cold formalism in the churches. Preachers such as John Wesley, Jonathan Edwards, and George Whitefield were key figures and used mightily by God. This was followed by a second Great Awakening in England in the 1790s, which led to the founding of colleges, seminaries, and mission organizations.

Here’s what really struck me. The thing that brought about these Awakenings and transformed lives and society was a return to preaching and applying God’s Word. People were awakened to the biblical truth that all people are born sinners and in need of a personal Saviour. And when the Word was preached, God blessed it and the people responded.

Folks, we’re at that place in our country where we need an awakening. I don’t need to overwhelm you with statistics proving my point because I think you know it’s true.

That’s why the work we do at Insight for Living Canada and your participation with us is so important. It is the preaching of God’s Word and the Gospel that “is the power of God at work, saving everyone who believes” (Romans 1:16).

The world places its hope in politics, science, education, money, and technology. And as helpful as those things might be, they can’t achieve what’s needed. The problem is lost hearts that are asleep toward God and need to be spiritually awakened. Even some professing Christians are in a spiritual stupor.

There’s only one thing that can bring about a real change.

As in the Awakenings of the past, it will be the preaching of God’s Word. Only God’s Word empowered by the Holy Spirit’s work can truly awaken a lost heart or stir sleepy Christians.

That’s why I’m asking you to send a financial gift today—so we can continue proclaiming God’s Word across Canada. Like you, we want to see individual lives and our country transformed.

As Christians we know the world is asleep to God. But if we as believers are in a spiritual stupor, we need to be fully awakened and living for the Lord too. We do well to heed the words of the Lord to the church in Sardis in Revelation 3:2–3 while we still can.

“Wake up! Strengthen what little remains.... I find that your actions do not meet the requirements of my God. Go back to what you heard and believed at first; hold to it firmly. Repent and turn to me again. If you don’t wake up, I will come to you suddenly, as unexpected as a thief.”

God will bless His Word. We just need to proclaim it.

Proclaiming God’s Word with you,

PS God awakens hearts with His Word. Send your support today to continue to get Scripture out so hearts can be awakened and lives can be changed.

Subscribe to our monthly ministry letter
Date:
July 1, 2022
Type:
Back to Top