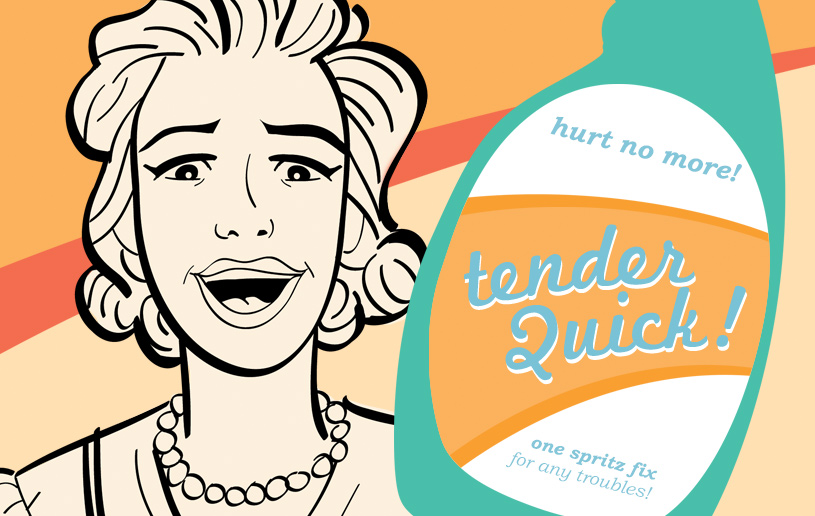 When I was just a kid, I got a bellyache that wouldn't go away. It hurt so bad I couldn't stand up straight or sit down without increasing the pain. Finally, my folks hauled me over to a big house in West Houston where a surgeon lived. He had turned the back section of his home into his office and clinic. It was a hot, muggy afternoon. I was scared.

The doc decided I needed a quick exam—though he was fairly sure I was suffering from an attack of appendicitis. He had whispered that under his breath to my mom. I remember the fear that gripped me when I pictured myself having to go to Memorial Hospital, be put to sleep, get cut on, and then endure having those stitches jerked out.

Looking back, however, I really believe that “quick exam” hurt worse than surgery the next day. The physician was rough; I mean really rough. He poked and thumped and pulled and pushed at me like I was Raggedy Andy. I was already in pain, but by the time Dr. Vice Grip finished his examination, I felt like I had been his personal punching bag. To him, I was nothing more than a 10-year-old specimen of homo sapiens. Male, blond, slight build, with a 99-degree temperature, nausea, and undetermined abdominal pain on the lower right side. Never once do I recall his looking at me, listening to me, talking with me, or caring about me. Although young, I distinctly remember feeling like I bored the man—like I was case number 13 that day, appendectomy number 796 for him in his practice. Truth be told, I felt like I was an irritating interruption in his plans for 18 holes of golf that afternoon.

Granted, a 10-year-old with a bellyache is not much of a challenge for a seasoned physician…but his insensitivity left a lasting impression. His lack of tender caring cancelled out the significance of all those neatly framed diplomas, achievements, and awards plastered across the wall behind his desk. At that painful, terrifying moment of my young life, I needed more than credentials. Even though a little kid, I needed compassion. A touch of kindness. A gentle, considerate, soft-spoken word of assurance; and a smile would have helped. Something to cushion the blows of the man's cut-and-dried verdict, “This boy needs surgery. Meet me at Memorial at five o'clock today.”

Looking back more than 60 years, I've learned a valuable lesson: when people are hurting, they need much more than an accurate analysis and a quick diagnosis. More than professional advice. I needed far more than a stern, firm turn of a verbal wrench that cinches everything down tight.

Attorneys, doctors, counsellors, physical therapists, dentists, fellow ministers, nurses, teachers, disciple-makers, parents…hear ye, hear ye! Fragile and fearful are the feelings of most who seek our help. Like tiny feathers, easily blown away in haste, they need to sense we are there to help because we care about them…not just because it's our job. Truth and tact make great bedfellows.

Sound too liberal? Weak? Would it help if you could see that someone like the Apostle Paul embraced tenderness? Although a brilliant and disciplined man, Paul was a compassionate and tender man.

For we never came with flattering speech, as you know, nor with a pretext for greed—God is witness—nor did we seek glory from men, either from you or from others, even though as apostles of Christ we might have asserted our authority. But we proved to be gentle among you, as a nursing mother tenderly cares for her own children. Having so fond an affection for you, we were well-pleased to impart to you not only the gospel of God but also our own lives, because you had become very dear to us. (1 Thessalonians 2:5-8 NASB)

Some day we shall all be on the receiving end of tenderness. We shall be the ones in need of affirmation, encouragement, a gentle touch of tenderness. It's like the timeworn counsel of Thomas Sydenham, the “English Hippocrates” (1624–1689), who offered to the professionals of his day:

It becomes every person who purposes to give himself to the care of others, seriously to consider the four following things:

First, that he must one day give an account to the Supreme Judge of all the lives entrusted to his care. Second, that all his skill and knowledge and energy, as they have been given him by God, so they should be exercised for His glory and the good of mankind, and not for mere gain or ambition. Third, and not more beautifully than truly, let him reflect that he has undertaken the care of no mean creature; for, in order that he may estimate the value, the greatness of the human race, the only begotten Son of God became himself a man, and thus ennobled it with His divine dignity, and far more than this, died to redeem it. And fourth, that the doctor being himself a mortal human being, should be diligent and tender in relieving his suffering patients, inasmuch as he himself must one day be a like sufferer.