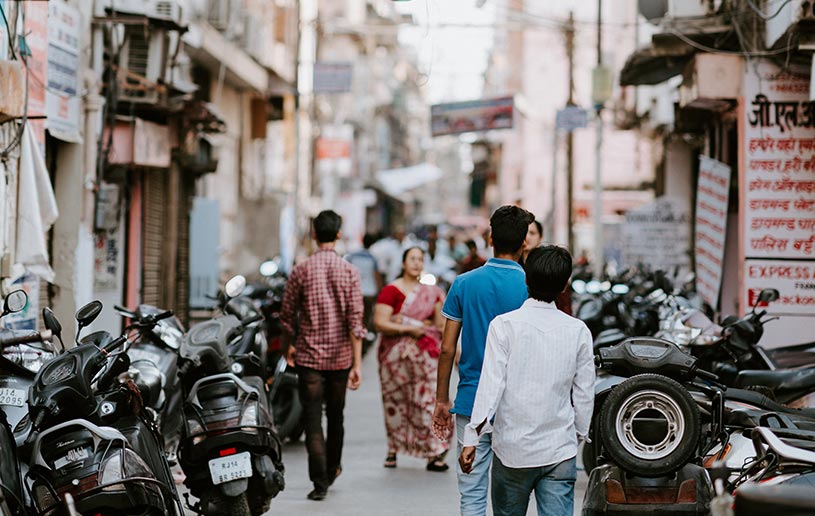 What if God gives you a passion for an entire country?

“I’ll never forget,” Kelley says, “The day I knew the Lord was calling me to reach India.” Ganga Grace, her adopted daughter from India, was eight years old. It was right after the Christmas when Grace had first understood that Jesus came to earth for her and had asked Him to be her Saviour. Kelley and her daughters were out catching the after-Christmas sales, when Grace asked, “Mama, did I hate Jesus?”

The question stopped Kelley in her tracks. “No, Sweetie,” she answered with her heart in her throat, “You just didn’t know Him.”

As Kelley spoke those words, a sobering realization settled on her: thousands of other children in India—boys and girls just like Grace—would never have the opportunity to know Jesus.

For Kelley’s husband, Jim, the calling came later. Ganga Grace was 10 years old. Their biological daughter, Anna, was 13. It happened one ordinary afternoon when Jim checked the mail and found a flyer from an organization that rescues women and girls from the sex industry—most of whom have ended up there through force, manipulation, sale, or the desperation of being an orphan teenaged girl uneducated and alone on the streets. The flyer shared the testimonies of two girls: an Indian girl named Ganga and a European girl named Anna.

“As I read their stories,” Jim says, “I couldn’t stop thinking, That could’ve been MY Ganga and MY Anna. And I realized there are so many Gangas in India who will never have the opportunities my Ganga has.”

That was when Jim and Kelley knew the Lord had given them an unmistakable passion for India. They longed for people all across the homeland of their Ganga Grace to know the grace of the Lord Jesus Christ and the life-changing truth of His Word. Yet, 1.3 billion people call India home.

How in the world could Jim and Kelley reach all of them?

In 2017, Jim and Kelley began partnering with Insight for Living Ministries to lay the groundwork for Vision 195 in India. Looking back, they realize the Lord had been building in them a calling for this country—and leading them to the way of fulfilling that calling—for decades.

We recently sat down with them to learn their story....

IFLM: How did you first connect with Insight for Living Ministries?

Jim: Although Kelley and I came to faith as teenagers, we were never discipled or taught to study the Word. By the time we met in college, neither of us was walking with the Lord. We had faith, but it was no larger than a mustard seed when we married in 1983.

We were living in St. Louis when our first child, Ty, was born in 1988. Then Clint came along in 1990. We decided to raise our family in church, but we weren’t delving into the Word for ourselves. Then, in 1992, my job moved us to Madison, Wisconsin, where we had no friends or family. We began looking for a church, but they all preached an ultra-liberal theology. We didn’t have the foundation to know why it was wrong, but it just felt off. Then, in 1994, my kid brother, Joey, died in an accident at the factory where he and my other brother worked in Mt. Vernon. My spiritual questions grew.

During that time, I travelled often for work, and I began listening to Christian radio, looking for answers. I found Chuck Swindoll to be one of the teachers I could really relate to. He was down to earth, from Texas, and a former marine. He rode motorcycles, liked to camp, and talked about football. He resonated with me. Chuck became an over-the-air spiritual mentor for me and prompted me to begin digging into the Word for myself.

Kelley: Fast-forward several years to Jim’s becoming an everyday listener through podcasts.... Daily, he would share what he learned. I wanted to engage with him, so I started listening too. It was almost like doing a devotional together. I listened when I could in the day; he listened as he drove to work. Then we would connect in the evenings and share our thoughts. I started using Chuck’s commentaries in my personal Bible study too.

Kelley: God was working in big ways in our lives through Joey’s death and our time in Madison. We would come home from church and say, “Did you hear that? Do we believe that?” We were really questioning. Up to that point, we had been coasting along. We had made the commitment to raise our family in church, but Jim and I weren’t spiritual leaders at home.

Jim: You hit on the key there, Kelley: We had committed to being in church, but it didn’t go deeper. We wanted to raise our family the right way, but we were mistaken about what the right way was. I needed to be the spiritual leader, and Kelley needed to be my helpmate. And together as a team, in our marriage and our lives, we needed to represent the body of Christ.

Our time in Wisconsin was refining. We were raising small kids. I was travelling often. Kelley had health issues, but there was no one to help with the kids. Then, in 1994, before my brother’s death, she got pregnant with Anna. The doctor kept thinking there was something wrong with the baby. They wanted to do an amniocentesis....

Kelley: ...To give us the option of aborting. That put questions in front of us that we had to answer, like, “What do we believe about the sanctity of life?”

Jim: ...Then Joey’s death was a wake-up call. He died at age 25, not 75. His death made us ask, What are we doing to prepare our children for eternity? God used that time to begin a transformation in us and to teach us who we should be in His kingdom, and He used Chuck’s teaching to help accomplish that.

Jim: When my brother passed away, we decided to move closer to family in Missouri. Kelley’s a trooper! We moved just two months after Anna was born, in December, from Wisconsin! I was still working for the same Fortune 500 company and had a four-state sales territory...so I listened to Chuck a lot more than I did my wife during the week!

In 1995, my other brother and I purchased a business together. While I worked 60, 70 hours a week to get the new business off the ground, Kelley stayed home with three small kids. The business didn’t flourish at first, and there was a lot of heartache that drove us to our knees. In 1996, in the midst of all that, I made time to go to the first Promise Keepers convention, where I rededicated my life to the Lord.

Fast-forward to 1999. The business began showing signs of life. I didn’t have to work every Saturday! We could hire other staff! In 2000, when we could finally take a breath, Kelley and I started talking about adoption. We had talked about it off and on from the time Anna was born on, but the talks got serious then. Two years later, we started the process. Two years after that, on February 9, 2004, we picked up Ganga Grace.

Kelley: Honest-to-goodness, I can’t tell you why I had thought about adoption. I had three beautiful children, but in my heart of hearts, I felt like we were going to adopt someday, and Jim was right there with me.

The idea stayed tucked away in our minds for years. Then one Sunday, in the bulletin, we spotted an announcement about a meeting to learn about adoption. It was as if God just walked into that sanctuary and said, “It’s ‘GO’ time!”

When Jim and I talked after the service, I learned he felt that same tug. So, we began making inquiries about domestic adoption. Let me tell you, the initial call was very daunting! I thought, Can we afford this?!?

Then we shared with our family that we felt the Lord’s leading us toward adoption. Jim’s brother said, “Hey, a couple in our church just adopted a child in India. Would you like to talk to them?” And we said, “Sure!” We honestly didn’t know anything about any kind of adoption! What we did know is that God was telling us to adopt an older child because we had been blessed with three babies....

Jim: ...And we found out, through that couple, that there’s not a lot of hope for older orphan girls in India. Generally, they can only stay in the orphanages until they are 14 years old. Their education is minimal, while most of the other children attend private schools. Although the caste system is outlawed, where you come from is still important in India. The colour of your skin is important. Your profession is important. In short, a teenaged, orphan girl in India has very limited options.

Honestly, as a white, Anglo-Saxon family living in the heart of the Midwest, we hadn’t thought about adopting from India. But, boy, once we heard this family’s story and saw their daughter, it really tugged on our hearts.

Kelley: Again, initially, we tried to adopt domestically. But the doors just never opened. And I tried! I was making those calls. I was on top of things. And the doors just stayed shut. Then we met this family and, later, their adoption agency. And God started swinging the doors wide open....

We can tell you now that Grace is exactly the child God chose for us and created for us long ago!

In 2000, God just walked into Jim and Kelley’s world through an announcement in their church bulletin. They knew for certain that they were called to adopt. And when they met Ganga Grace, they knew beyond a doubt that she was their daughter. But they couldn’t imagine just how far the calling God had given them would stretch.

Nearly 20 years later, they’re seeing the results of what happens when God just walks in and we say YES! to His surprising invitations....

Read the rest of Jim and Kelley’s story and learn how the Lord is using their passion for an entire country to lay the groundwork for Insight for Living India, and how He might work through YOUR passion next!