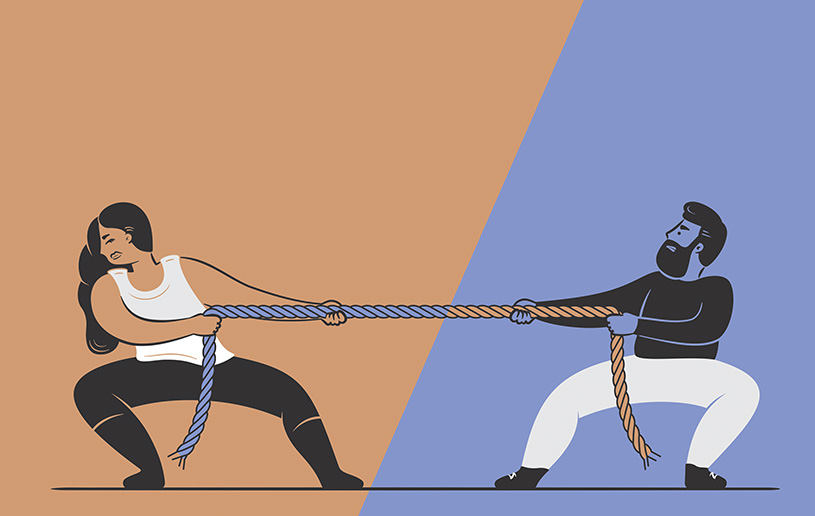 One of the hot-button words being thrown around a lot these days is the word racism. In general, it means prejudice, stereotyping, or discrimination against particular people groups. It seems though that almost everything is deemed as racist. It is applied to so many situations that it has become a meaningless confusing catch-all word.

One place where the confusion starts is with the word “race” itself. Although Charles Darwin wasn’t the first to suggest that the humans descended from different races, his evolutionary theory popularized it to the extent that it became mainstream thinking and fuelled racism.

He theorized that people, having evolved from apes, had continued evolving as various races, with some races more developed than others. He taught that different groups or “races” of people evolved at different times and rates so some groups are more like their apelike ancestors than others with lighter skin. Darwin classified his own white race as more advanced than those “lower organisms,” such as pygmies, and he called different people groups “savage,” “low,” and “degraded.”

The full title of Darwin’s most famous work includes some often-omitted words: On the Origin of Species by Means of Natural Selection, or the Preservation of Favoured Races in the Struggle for Life. He also said that the inferior races at some time in the future would all be destroyed by the superior races.

Hitler was a devout evolutionist and believed that people were engaged in a constant struggle for survival. The climax of history would be the survival of the fittest race, which he believed to be the “Aryan” race. We all know how that turned out.

As a result of Darwinian evolution, many people started thinking of the different ethnic groups around the world as representing different “races.” This has resulted in many people today, consciously or unconsciously, having ingrained prejudices against certain other people groups.

Ever since the idea of evolution became popular and widespread, Darwinian scientists have formed continuums that represent the evolution of humanity. Some “races” are placed closer to the apes, while others are placed higher on the evolutionary scale. These continuums are formed solely by outward appearances and are still used today to justify racism.

This is erroneous because modern genetics have clearly proven that our differences, few as they might be, are no deeper than the skin. Biologically, according to the researchers at the Human Genome project, there is only one race—the human race.1 Any so-called “racial” differences are trivial and while there are differences among us, they stem from culture, not race. So, it is a misnomer to speak of different races. We are all one race, homo sapiens, comprised of many ethnicities and people groups, tribes, and nations.

We didn’t evolve from apes. The Bible teaches, “So God created human beings in his own image. In the image of God he created them; male and female he created them” (Genesis 1:27). According to Scripture, all humans are descended from Adam and Eve. Acts 17:26 says we are all “one blood” (KJV). “From one man he created all the nations throughout the whole earth” (NLT).

Racism exists because of our sin nature. We proudly think we are superior in some way and have the right to dominate others or that a different particular group is inferior to us.

We also have racism because we live in a sinful world that has taught us to compare the outward differences. Sometimes it is the nurture influence—parents, grandparents, siblings, or teachers. Sometimes it is the media influence, which labels and differentiates (e.g., black, white, Asian, Indigenous, etc.). When particular groups are cast in a negative light or as gaining privilege or benefits other groups don’t receive, the reaction is often one of sinful resentment, which breeds racism.

But Jesus came to redeem us from racism and shows us how we should respond to other ethnicities. For example, see how He interacted with the Samaritan woman in John 4. Jews typically hated and shunned Samaritans but Jesus engaged with them as people created in God’s image and even made one the hero in His story of the good Samaritan.

Jesus died for our sin so that divisions and barriers would be removed. “There is neither Jew nor Gentile, neither slave nor free, nor is there male and female, for you are all one in Christ Jesus…” (Galatians 3:28; cf. Romans 10:12 NIV).

Racism will not be defeated until redemption is fully accomplished. And then, when all the redeemed stand before the God who made us all we will see “...a vast crowd, too great to count, from every nation and tribe and people and language, standing in front of the throne and before the Lamb” (Revelation 7:9).

We’re all one blood. Let’s live like that now.