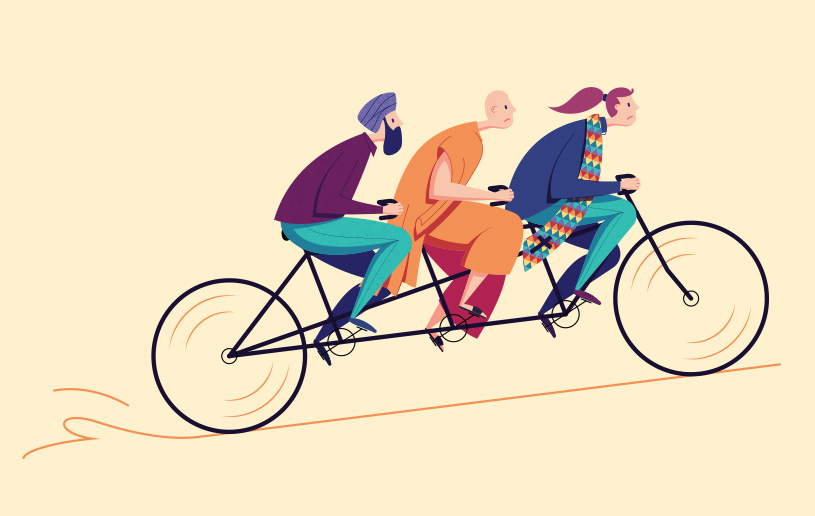 Canada is a mosaic of people from all over the world with many different ideologies and religious beliefs. Because of this we describe our country as pluralistic. As our society becomes even more ethnically diverse, pluralism is something we will experience in greater measure.

Beyond the varieties of beliefs and ideologies existing in our society, there is a kind of religious pluralism that is promoted. Combined with relativism, it asserts that all these diverse religious beliefs are equally valid and that there is more than one path to God. While it’s touted as tolerant and therefore superior and more enlightened, asserting this is itself a doctrinal statement and excludes all other beliefs. So the proponents of religious pluralism are guilty of the exclusivism they forbid in others. It’s really just another religion with a specific view of salvation contrary to Christianity. Christians take issue with this because Christianity makes, and always has made, the exclusive claim that faith in Jesus Christ is the only way to God and salvation.

There are two questions we must answer when confronting this type of religious pluralism.

From a pluralist’s standpoint, the exclusivity of Jesus as the only way of salvation is intolerant. It assumes the existence of absolute truth, that it may be known, and it delegitimizes all competing religious claims. Exclusivism does not fly well in a secular society saturated with relativism, the idea that truth is relative to the individual.

The Bible teaches that all people have some knowledge of God and a sense of obligation to Him (Romans 1:18-21). This knowledge produces in humanity a sense of sinfulness and guilt, which are actively supressed. Human religions are our attempt to manage this sense of guilt and worship God while simultaneously trying to suppress God’s demands on us. Religion is our attempt to reach up to God.

In contrast to human religions, the Gospel teaches that God has reached down to us. It fully acknowledges human guilt and provides a way for our guilt to be removed. It is here we find the rationale for the exclusiveness of the Christian faith and its reason for being. Christianity proclaims that God has made a way for sinners to be rescued from their sin and restored to fellowship with Him through the person and work of the Lord Jesus Christ.

Christ the Redeemer stood in the place of sinners and provided for them in His saving death and Resurrection all that God requires. In His sacrificial death He rendered satisfaction to God whose law was broken by our sin, and God gave public approval of His accomplished work in raising Jesus from the dead.

The sacrifice of Christ was the only possible means of saving us. If there was some other way to provide salvation for humanity other than Jesus’ death, God would have done that. God can acquit the guilty sinner only on just grounds, and it’s only in Christ that these just grounds have been met (Romans 3:21–31).

Humanity’s religious efforts are insufficient because they don’t solve the problem of our guilt at having broken God’s law. The penalty for lawbreaking is death, so all the religious activity or good behaviour in the world isn’t adequate. Only Jesus, by His sinless life, substitutionary death, and triumphant Resurrection from death provides what is necessary for salvation. No one else in the history of the world has died because he bore the sin of others and not as the judgment for his own sin. Therefore, Jesus alone qualifies to be Saviour.

But what if someone has never heard of Christ? Can they still be saved apart from believing in Him? Jesus Himself says no, “...everyone who believes in him will not perish but have eternal life... anyone who does not believe in him has already been judged for not believing in God’s one and only Son” (John 3:16–18). Jesus wasn’t kidding when He warned, “...you will perish, too, unless you repent of your sins and turn to God” (Luke 13:3). He told His disciples, “I am the way, the truth, and the life. No one can come to the Father except through me” (John 14:6).

In Romans 3, Paul reasons that since everyone is unrighteous before God (Romans 3:9–10), the only remedy is attributing the righteousness of Christ to them (vv. 24–25), and this righteousness is received only by faith, because God “makes sinners right in his sight when they believe in Jesus” (v. 26).

Among all religious figures and founders in the history of the world, Jesus alone, because of who He is and what He did, is qualified to be our Saviour. That makes Christianity unique and exclusively the saving truth we need to believe and proclaim.