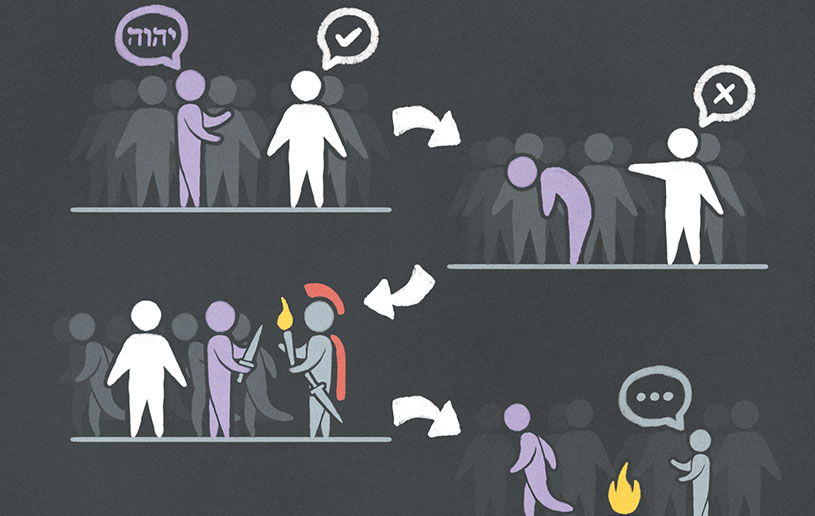 Inconsistency. We see it first in his name Simon Peter—Simon, son of Jonah, or John. John means “dove-like,” suggesting the idea of docility and weakness, the roots of inconsistency. Simon comes from petros, a piece of stone chipped from a rock face, a pebble. Put together we might say that Simon was “a chip off the old block,” weak like his father. Maybe he’d seen it modelled as he grew up.

We see it in his actions.

In Matthew 16:13–19 (NIV), Jesus asks a critical question: “Who do people say the Son of Man is?” Peter answered, “You are the Messiah, the Son of the living God.” It is in the context of this confession that Jesus affirms Peter. “And I tell you that you are Peter and on this rock I will build my church and the gates of Hades will not overcome it” (Matthew 16:18). This knowledge had come to Peter through revelation from the Father, and provided grounding to become more consistent later.

Really knowing Jesus is essential to consistency. That happens by spending time in the Word, seeing Christ in the pages of Scripture, and experiencing and trusting Him in our daily lives.

Just before His ascension, Jesus is probing the depths of Peter’s heart (John 21:15–17). Is it a cause Peter is interested in, or is it Christ?

Jesus asks the same question three times and three times he uses Peter’s old name Simon, son of John. Three times he asks, “Do you love me?” Did Peter love Jesus more than himself? Did Peter love Jesus? Out of the probing and searching of the questioning and the overpowering love of the Questioner a new love was born. Peter’s love for Jesus became the ruling passion of his life. Now as never before, it was Peter the rock rather than Simon the pebble. It was as a son of God rather than a son of John. It was deep love rather than an infatuation.

The greater our love for Christ, the stronger our devotion, obedience, and consistency of walk with Him will be. This happens as we grow in the knowledge of how great God’s love is for us. Even after miserable failures like Peter’s God still loves us infinitely.

The last element producing a transformation in Peter was when he was filled with the Holy Spirit and empowered Peter to be a witness. Love is an attribute of character. Power is an equipment of ability. Love is a grace. Power is a gift. Love is for life. Power is for service. With the filling of the Spirit there was now the power for Peter to be consistent.

You and I may have knowledge about Christ and even love and appreciate Him for His love for us. But without the Spirit filling us and controlling us the power to be consistent is just not there. Our greatest duty once we have become Christians is to be constantly living under the influence of God’s Spirit.

As we look at the later years of Peter’s life through the letters he wrote, we see a man who is indeed a rock. He offers encouragement and stability to people who were suffering bitter persecution. He is solid and steady. He is no longer easily moved. He does not fluctuate and vacillate. He has matured.

This is what I want for you and me.