Learning from "the Least of These" 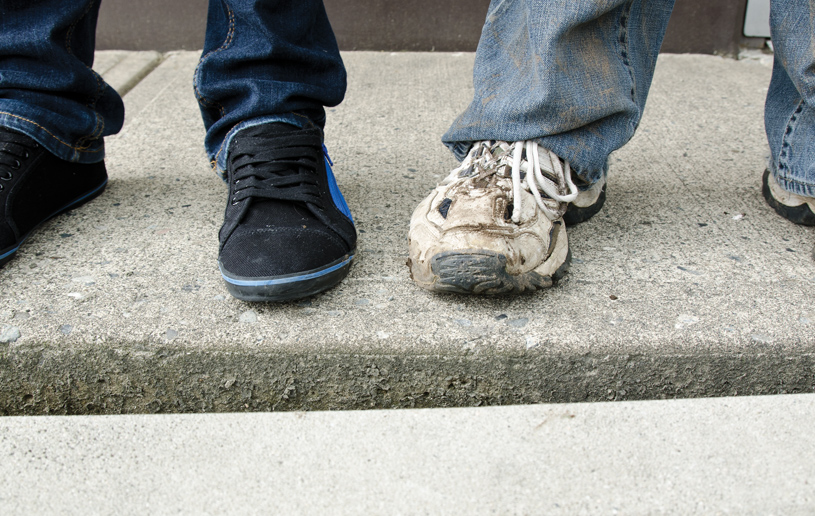 The first time I met him I thought he was dead. Lying halfway in a merge lane with his legs twisted awkwardly beneath was Barry—stinky, toothless, and quite possibly dead, Barry. Both on our way home, the difference was that I'd make it and he wouldn't. Barry couldn't even get over the curb and off of the street.

I'd been on a late night run to the grocery store on my way home from what was, no doubt, another forgettable sermon preached to a crowd of hip but mostly apathetic young adults. Sure they cared about some things but like me, life was too busy and complicated to care too much. Besides, I sponsored a child and bought her a goat once, which should do it, right?

Instead of being home I found myself stopped in the merge lane, car in park, debating if I should get out and help or continue on my way. I'd heard stories about this; guys who play dead waiting for some self-righteous soul to pity them just long enough so they could beat him and steal his car. Urban legend probably but still…did I really want to risk it?

Behind me the 20-somethings in the SUV became impatient as I hesitated, locked in indecision. Headlights flickered, the horn blared and I heard words I see hockey players use and sometimes sputter under my breath. Oh bother, I decided, I'm helping this man.

Hip surgery. Apparently this is what Barry needed and on this cold night his pain was too great. He could move no further. A moment later, the SUV drove up the curb to curse us out; spit in our faces. Barry rose to his feet just long enough to defend me. I wiped the spit off my face and wondered if Barry would do the same. He didn't, he just simply collapsed and said thank you.

I spent many nights that spring and summer with Barry. I was a wide-eyed suburban kid who for the first time saw squatters and shanty towns, teenagers and elderly, living on whatever they could, however they could. Barry was a constant target for muggings. Hardly able to walk, he had no way to defend himself, his scraps, or his trash. Had he simply been asked, Barry would have given it all away.

More than anything, he wanted to go home to see his mother—a three-hour drive east. Always declining a ride, Barry wanted to raise enough cash to buy a bus ticket and do it on his own. Sadly every week his money and possessions were stolen. Every week I bought him a new can opener and a box of Shreddies because he loved how the cereal melted in his toothless mouth.

Once while dropping off a load of his laundry he said, “Thank you so much for helping me. That's what I do too; I help the needy, even when they steal from me.”

The last time I spoke with Barry I was halfway across the country and preoccupied with concealing my pride that a homeless man would call my cell phone while a group of pastors listened in. Barry had come upon some cash and, with a bus ticket already purchased, wanted to buy me lunch.

I wondered then as I wonder now if he saw me as the needy one. Was I the one who was really being helped? Barry opened my eyes to injustice and true charity. In him I saw a person, not The Homeless. I appreciated for the first time someone who would give literally everything away to care for someone in need. I saw generosity deeper and richer than I'd seen, or have ever witnessed since. Barry taught me about courage and he dragged me out of my comfort zone into a real world that didn't involve cappuccinos and clever youth ministry games.

More than that, I never would have learned this in a book or from a magazine article. Generosity has come into my home by watching the life of “the least of these.” Teachers and mentors are all around us, and very often in the most remarkable of places. Children, peers, co-workers, and that crazy guy down the hall. Each has something to contribute to your life. On our part, it takes a humble attitude of learning and the courageous action of sharing life together.

The last time I saw Barry was three years later, on the front cover of a major city newspaper. He died, as the story goes, in the hospital at age 53 and was left for five days before anyone bothered to tell his next of kin. The hospital never called to offer condolences; they called only to ask what they should do with Barry's bicycle. My bet, if Barry had his choice, he'd have given it away.

Subscribe to our monthly magazine
Date:
August 12, 2011
Type:
Topic:
Back to Top