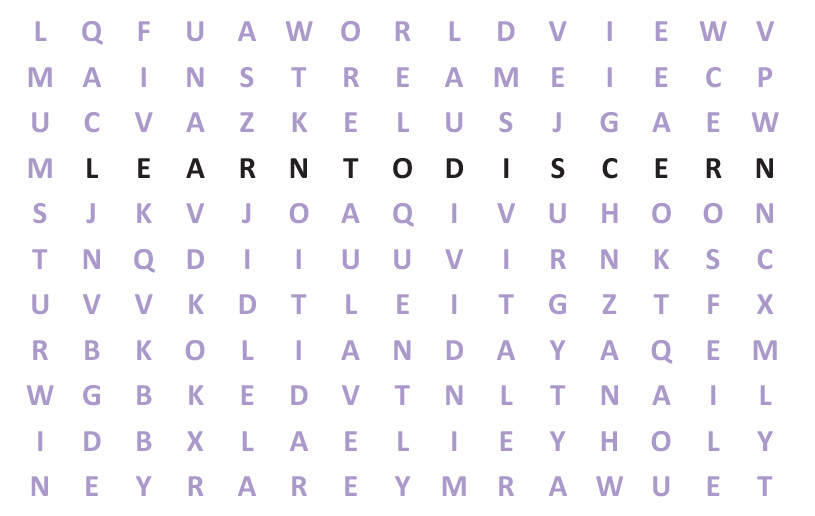 “Don’t be so open-minded your brains fall out!” someone once said to me. Proverbs 3:21 puts it more eloquently, “My child, don’t lose sight of common sense and discernment. Hang on to them.” Hebrews 5:14 says, “Solid food is for those who are mature, who through training have the skill to recognize the difference between right and wrong.” Learning discernment is being able to tell the difference between what is true and what is false.

We live in an age of relativism—the belief that every point of view is as valid as any other point of view and an individual is the measure of what is true for that person. If we do not learn to discern we too may become adrift on the iceberg of cultural mainstream.

We see this relativism exhibited in behaviour, such as that of Christians who use and abuse illegal drugs. And we see it in beliefs as it surfaces when Christians treat Scripture and the interpretation of it as relative to the individual. “What this means to me is…” or “That may be true for you…” or the classic, “Well, I don’t interpret it that way….”

Try having a discussion about why certain things are wrong. Watch people squirm at the thought of making judgments about the moral evils in society around us. They don’t think they are allowed to do that. Adopting relativism they think loving others means never evaluating their actions.

You’ll hear Christians say “Jesus said, ‘Do not judge others, and you will not be judged’” (Matthew. 7:1), quite unaware that they are taking Jesus’ statement out of context and out of balance with His statement, “Look beneath the surface so you can judge correctly” (John 7:24).

In order to judge correctly though, believers must judge. The Apostle Paul also makes it clear there are matters that we are to judge, like sinful behaviour in the church (1 Corinthians 5:12) and false teachers arising in our midst (1 Timothy 1:3).

One reason this can seem confusing is because there are two meanings of the word “judge.” One means to condemn, the other means to evaluate. While we are forbidden to condemn—that’s God’s job—we are required to evaluate. Without judging in this context, we’d be unable to discern the difference between the atrocities of Adolph Hitler and the humanitarian efforts of Mother Teresa.

So if we are to judge, or discern, in this way, upon what basis do we do it? Jesus said, “Make them holy by your truth; teach them your word, which is truth” (John 17:17). He is referring to the Bible as the Word of God. It is not a truth nor is it merely one valid view among many. It is truth.

Because of our sinful incapacity to know truth, God gave us the Bible as revealed truth. It reveals the truth about God, humanity, authority, morality and destiny—the basic concepts of any worldview. And since He is the absolute and ultimate creator and authority of us all His Word is the absolute and ultimate authority for all. All beliefs and behaviours must be viewed through the lens of the truth He has revealed. It is our yardstick.

Most Christians would give a hearty “amen” to what I’ve written so far. In spite of this, some view their experience as an authoritative source of truth for their faith and lifestyle. A popular song of 1977 echoed the sentiment: “It can’t be wrong, if it feels so right.” But experience is not an adequate yardstick of truth because the question may fairly be asked, “Whose experience is unlimited enough or objective enough to be authoritative?” So experience must be tested against the yardstick of God’s truth and where it doesn’t match, experience is wrong.

Tradition is also used as the authoritative guide among many Christian people. “This is the way our church does it….” But this too fails the test because whose tradition is to be followed among the many out there? Traditions too must be subject to the scrutiny of Scripture.

There are even those who set up some individual as an infallible source of truth for their faith and life. Again, among the many prominent people out there which one do we choose? How do we know that what they are saying is what should be followed? As mere mortals are they too not fallen and fallible? Even the Apostle Paul commended the Bereans for evaluating what he taught them in the light of Scripture (Acts 17:11).

In the past Christians have been known as People of the Book. The phrase “It is written…” once again needs to be our mantra and watchword. We will never learn to discern if we don’t return to the Book.