How to Stop Expecting Perfection 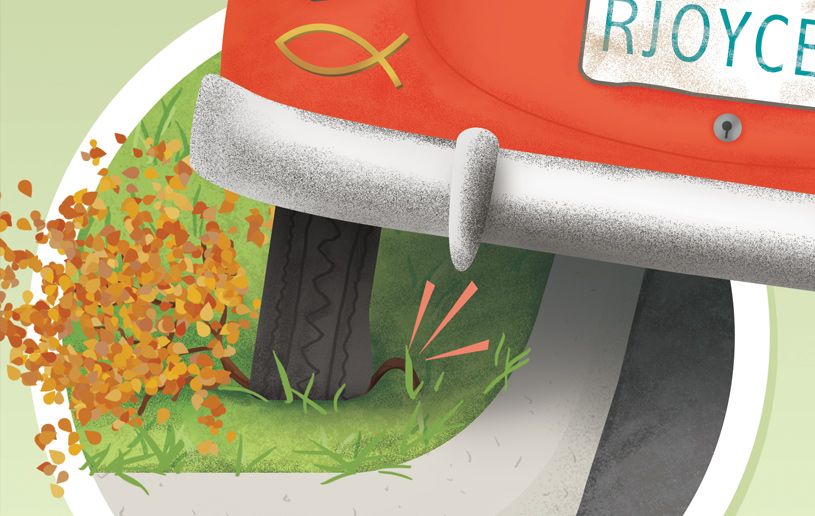 Not being a bumper sticker freak, I find myself turned off by most of the stuff people announce on rear windows and back bumpers.

But years ago I noticed one I've never forgotten. For some reason, it stuck in my cranium as firmly as on chrome. You've seen it dozens of times:

CHRISTIANS ARE NOT PERFECT, JUST FORGIVEN.

The last time I saw it was on the back of a car that whizzed by me on the freeway while I was doing about 70 mph. The time before that, I saw the sticker on a parked VW bug that had a ticket under the wiper because the meter was red.

Now before I emote all over this page, I need to set the record straight. There is no way we are ever going to convince all those outside the family of God that this bumper sticker is true. A few unbelievers understand, but most will never get it. Instead, most non-Christians will continue until their dying day being shocked and angered, and offended and blown away whenever a Christian shows even the slightest crack in his or her life. Of all the things unbelievers can't seem to understand about Christians, God's grace and human depravity confuse them the most.

If you've spent much time talking to the lost about Jesus, you know how often those two questions get asked. They are stumped when it comes to the seeming incongruity of the grace of God and the humanity of Christians. Why? Because the unbeliever's whole perspective is horizontal. Their earthly mindset says: things that are valuable are costly. Therefore, it is inconceivable to them that something as priceless as heaven could be offered as a free gift. And there isn't much grace running loose on the horizontal plane either.

Also, because the nonbeliever's whole frame of reference is human-centred, it's virtually impossible for them to imagine that an individual who claims to be in God's family is one who still struggles with imperfection. After all, they'll ask, “If you say God has come into your life and Christ has wiped your slate clean, how come you aren't perfect?”

That's the non-Christian way of thinking. They equate salvation with perfection—no wonder they're confused! But Christians? Hey, we know better…and we certainly should.

Being fellow members of one another, we understand that becoming a Christian in no way ushers us into a life of perfection that erases our humanity and eradicates our depravity. If perfection actually happens at the moment we believe in Christ as our Saviour, then why in the world is the New Testament filled with the importance of obeying God after salvation? Why does it teach about forgiving one another, understanding each one's failures, accepting their cracks, and focusing on their strengths (few though they may be)? It's one thing for unbelievers to expect perfection—I can live with their expectation and tolerate it fairly well—but it's most disconcerting to be pushed into a perfection mould by fellow Christian brothers and sisters!

CHRISTIANS ARE NOT PERFECT, JUST FORGIVEN.

How very easy it is to manipulate and victimize our Christian brothers and sisters! How quickly the thin thread of freedom snaps as heavy weights of perfectionistic expectations are laid on us! Christ Jesus never did that with those around Him. When people were near Him, there was incredible magnetism because of His absence of unrealistic expectations, subtle demands, and manipulative devices. Rather than using pressure tactics, He simply accepted people as they were.

Paralysis sets in when we struggle to breathe in the choking context of the perfection–expectation syndrome. Fed by fear and guilt, the Christian becomes a victim of fellow Christians rather than a victor in Christ.

Let's back off! Let's relax the stranglehold on each other. Let's allow the Lord to do the correcting and the finger pointing and the demanding and the judging. Let's grow up and stop being so nitpicking and condemning. I love what the late Ruth Graham so wisely said: “It's my job to love Billy. It's God's job to make him good.”

Replace the name Billy with the name of your mate, your parent, your friend, your boss, your missionary—and especially your pastor—and you'll begin to get the drift of the bumper sticker's message. What's more, you'll be a lot easier to live with.

And so will I.

Subscribe to our monthly magazine
Date:
January 2, 2013
Type:
Topic:
Back to Top