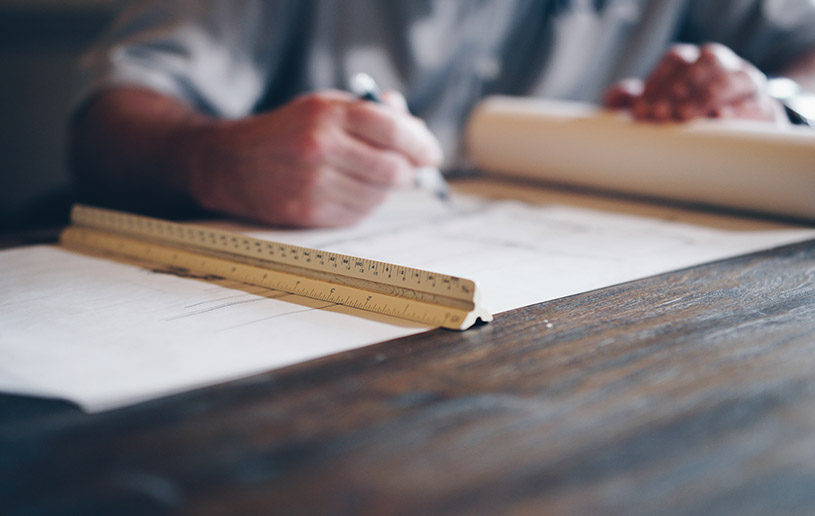 Being heard anywhere other than the pulpit had never entered my mind! Al looked at me and said, “What you’re preaching, it ought to be on the airwaves.” I laughed, “Al, I don’t have time for that.” He shook his head, “Oh, no, no! We’ll take care of everything.” I said, “Well, Al, you’re the radio man. I’m the preacher man. I’m made for the pulpit. If you think something can be prepared and packaged for a broadcast, sure. Give it a try.”

July 1979, Insight for Living was born. Today, it can be heard worldwide on more than 2,000 stations and in eight languages! People often ask, “Chuck, was this your plan?” No! Cynthia and I never had a master plan, but we did follow THE Master’s plan.

Plenty of things have changed since 1979. Some things haven’t. We’re still committed to excellence in teaching the study and application of God’s Word. We’re also still partnering with individuals called by God to serve in the roles He created for them.

Remember, I told Al, “You’re the radio man. I’m the preacher man.” Allowing the Lord to guide us to the right people...and then trusting Him to guide them is an essential part of what’s made us grow. It’s also an essential part of Vision 195—our strategy to extend God’s grace and teach His Word in all 195 countries.

The genius of Vision 195 is that it’s God’s idea. The Great Commission is HIS master plan...and we get to do it together—with each of us filling the role He created for us. That’s why, at Insight, we’re training pastors in their own countries to minister to their people, in their languages and cultures. It’s also why we’re partnering with YOU.

We’ve dedicated this article to telling you about one of those pastors, Charlie Costa, who leads the IFLM Arabic-language ministry in Lebanon. I want you to get to know him better.

Let me stop and answer one big question, Why Arabic?

Why not! Where did God send Jesus? Where did He grow up? He was in the Middle East, speaking a language very similar to Arabic. Almost 2,000 years later, darkness reigns where the Light walked.

Terrorism is frightening, but God has not called us to play it safe. Satan has convinced many Christians that even peaceful Muslims aren’t worth it, that no one who speaks Arabic would listen, that terrorists are a lost cause. It’s a LIE! Christ called us to proclaim His Truth in every one of the 6,875 languages that people around the world dream in...and He’s given us what we need to do it: His Word and His Spirit.

God’s Word is irresistible everywhere. It’s alive and powerful in every language and every culture! It provides the freedom every Muslim longs for! It transforms terrorists’ hearts! If you pray for peace, for God’s will to be done on earth, you must support getting His Word to Arabic-speakers.

That’s why, when the Lord began opening doors for an Arabic-language ministry in the late 1990s, Cynthia and I said, “YES!” When we met Charlie, we knew he was God’s man to lead it. Today, as our Arabic-language pastor, Charlie lives in Beirut, translating resources, voicing Insight for Living in Arabic, and maintaining our Arabic-language website. His ministry covers the Middle East, and through technology, extends worldwide to 420 million Arabic-speaking people.

Last month, Charlie Costa visited our international headquarters to talk with board member, Roger Kemp, and me. The conversation will be on the air March 20. Today, we’ve adapted a bit for you to get a sneak peek in writing.

Charlie: Chuck, my connection to you started very early, because my father was an avid listener to your preaching. Later, the Lord opened the opportunity for me to serve at the ministry, and it has impacted not only my preaching, but my life. On my desk, I have a piece of cedarwood with an engraving: “This is a place of grace.” People ask, “Where did that come from?” I say, “I’ve learned that from Chuck.” I want to be a man of grace and a conduit of grace.

Chuck: Isn’t it true that you rarely come across grace in your culture?

Charlie: Arab culture is tough, harsh, legalistic. This is the only world people have ever known when they walk into my office and start confessing their sins. When I answer, “OK,” they can’t believe it: “Is that all you’re saying?” “Yes,” I answer. “Because of grace, what you’ve done can be covered by the blood. You’re accepted in Christ already! You can be rejuvenated, renewed, and in full fellowship with Christ because of the grace of God.”

Chuck: Who doesn’t want to know that, believe that, and live in that kind of freedom?

Charlie: Their minds are blown up by grace! “You’re not going to judge me?” they ask. “If it wasn’t for God’s grace,” I answer, “I would be in your seat.”

Chuck: Christians often miss that. They think, You’re letting people off light. If that’s true, God let us all off light! At the cross Jesus said, “It is finished!” (John 19:30).

Charlie: That’s what impacts people, to feel accepted and loved unconditionally. One of the biggest misconceptions I encounter is this: “Muslim people don’t want to hear the Gospel.” But many, if given the opportunity and freedom, would seek Christ. Some do in secret, like Nicodemus. They hear about Jesus and want to know more—despite the risk. Recently, we baptized six people, five of whom were Muslim converts. Later, two were ambushed and beaten.

Muslim people are hungry for truth, to be loved, accepted, just as they are. Have you ever thought that maybe terrorism exists because the church has failed to spread the Gospel? Terrorism is an exemplification of the total depravity of the human heart—evidence that we have failed to take the message. Insight for Living Ministries has taken this very seriously!

...One of the most impactful series we’ve translated and aired is Getting Through the Tough Stuff. People thought, That’s me! I’m going through THAT! When we aired the series, I got a letter from a gentleman, written in beautiful Arabic, so well written that I assumed, correctly, he was an Arabic-language teacher from the Palestinian refugee camps. I called him, and we arranged to meet. When I arrived, he pulled out a piece of paper with all his questions. He meant business!

We spent three hours answering his questions. Then I said, “I want to give you something very valuable,” and pulled out a New Testament. I said, “I want you to read this. In this lie all your answers.” Then I gave him some of your books in Arabic.

Chuck: Did he not have a copy of the Scriptures?

Charlie: No. He was well educated, spoke very eloquently. But he had never read the Word. He didn’t have the answers he longed for. I see a replica of the same story over and over! I meet with someone who has a heavy burden, I share the Gospel, and then I hear the same thing: a huge sigh of relief. They ask, “Why has no one ever told me this!”

Why has no one ever told me this!

Are you as ready as I am for no Arabic-speaker to have to ask that question ever again?

Imagine: A world in which EVERY Arabic-speaker knows God’s grace. It’s not some far-fetched dream! The Light IS dawning for Arabic-speakers. God IS fulfilling the Great Commission. It’s His master plan, and He’s inviting you and me to be a part of it!

Subscribe to our monthly magazine
Date:
March 16, 2018
Type:
Topic:
Back to Top