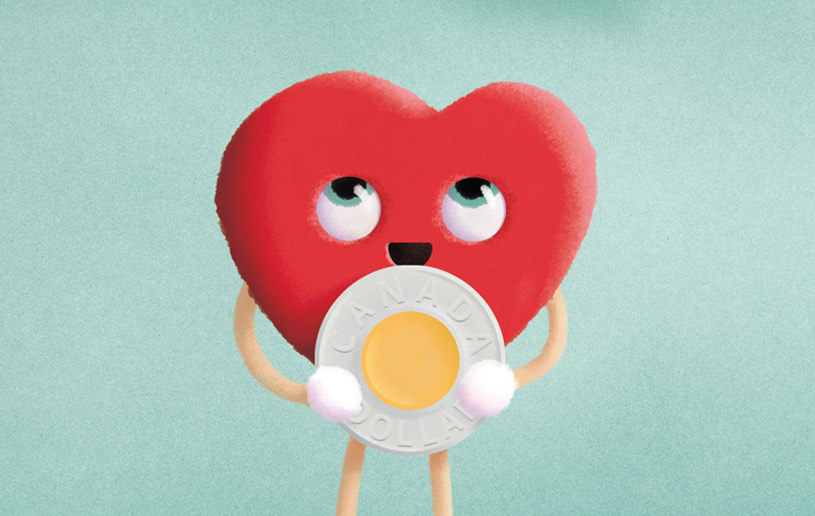 I heard a story about a man getting baptized. As the pastor was about to immerse him the man suddenly realized he had his wallet in his pocket. Quickly he grabbed it and held it aloft as the rest of him was plunged into the water. His wallet never got baptized. The bottom line is, “Wherever your treasure is, there the desires of your heart will also be” (Matthew 6:21).

Talk about money and you touch a pressure point. For that reason, many pastors never do—leaving some believers with unbiblical ideas about money and giving. They adopt the world’s attitudes never learning what the Bible teaches, namely, that giving is first and foremost a heart issue, more about sense than dollars.

In 2 Corinthians 8 and 9 Paul gives us some principles about giving, which I have gathered under four headings.

Paul’s teaching to the Corinthians on giving needs to be understood in the wider biblical context of stewardship. Psalm 24:1-2 declares, “The earth is the Lord’s, and everything in it. The world and all its people belong to him. For he laid the earth’s foundation on the seas and built it on the ocean depths.” Our hearts need to line up on this: everything, including all we are and have, is God’s. The question we ask is not, “How much of my money should I give?” but, “How much of God’s money should I keep?” Our giving is an extension of our heart’s submission to the Lord and our dedication to stewardship for Him (2 Corinthians 8:5). He is our model, motivator, and equipper for giving (8:9; 9:8-10, 15).

In God’s eyes heart-attitude is more important than dollar-amounts: “You must each decide in your heart how much to give. And don’t give reluctantly or in response to pressure. “For God loves a person who gives cheerfully” (2 Corinthians 9:7). He allows us to participate with Him in His work of redemption which means that giving is a privilege, not an onerous duty (8:4).

I love the story of the young boy sitting in church with his Dad when the offering plate was passed around. The Dad reached into his pocket, pulled out a one-hundred-dollar bill and put it on the plate. Suddenly, he realized he’d put the wrong bill in and, not wanting to appear stingy, he left it. Then he turned to his son and whispered in disgust, “I only meant to put a five-dollar bill on the plate.” To which his son replied, “That’s OK Dad. That’s all you’ll get credit for anyway.” A joyful heart attitude in giving pleases God.

The way God calculates, the value of a gift is not determined by amount, but by its cost (8:2). The widow in Mark 12:41-44 who gave her two coins gave more in God’s eyes than everyone else because she gave all she had. And we can’t overlook the intentional positioning of this story. It was part of Jesus’s criticism of the Pharisees for the way they covetously robbed widows (12:40) instead of caring for them as the Old Testament taught. The greatest threat to generous giving is not poverty, it is an attitude of covetousness (9:5).

When we are deciding how much to give Paul lays out several principles hinging on our heart’s faith. The first is that it is to be according to our ability (8:3) and according to what we have, not what we don’t have (8:12). Elsewhere, he says we are to give “in keeping with our income” (1 Corinthians 16:2 NIV). That means proportionately, as God has prospered us. There is no specific amount nor a particular percentage enjoined upon Christians anywhere in the New Testament. Increasing prosperity should result not only in an increase in the amount given, but in the percentage. That means some Christians should think in terms of 15, 20, 40 or even 60 per cent. Abundant receivers should be abundant givers. And if we promise financial support every effort must be made to fulfil it (2 Corinthians 8:10-12; 9:5).

Assumptions, attitudes and abilities are all matters of the heart. So is the amount we give. We are not expected to give more than we are able but we may find that we can give more than we thought we could afford (8:3, 12). What if we purpose in our hearts to give more? Those who want to give more will be given greater ability to give more (9:9-11). And “God can pour on the blessings in astonishing ways so that you're ready for anything and everything” (2 Corinthians 9:8 The Message).

When taking account the bottom line is always the most important. With God it is this: giving is heart work.