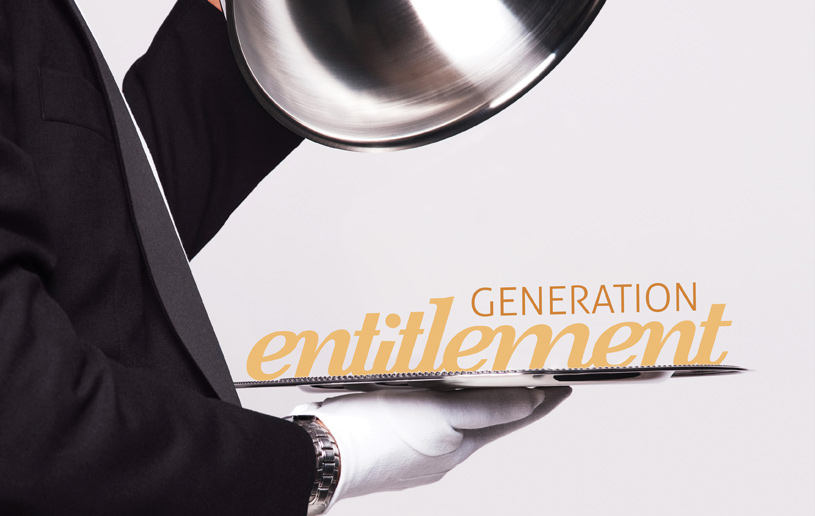 There's this friend I have who's a little bit spoiled. You probably have a friend like that too. Someone who (in your opinion) has never needed to work very hard and seems to take it for granted.

For the most part, my friend's situation didn't really bother me except in one area: work. I don't know how many jobs she has been through in the past five years. Ten. Maybe more. And she just keeps losing them. Of course there's always a reason why. And I actually understand some of them. But the one I can't get over is the reason she quit her last gig—according to her they just didn't treat her right.

We're all familiar with the names for this attitude. In fact, they're labels for an entire generation—Generation “Me,” the Ungrateful Generation, the Entitled Generation. In short it's those selfish 20somethings expecting everything to be handed to them and not appreciating any of it!

In some ways I connect with this assertion, I mean my friend seems to fit the definition pretty well. But while researching for this article I was overwhelmed with the amount of negativity towards this generation and my opinion has shifted somewhat.

People born after 1981 are called everything from selfish and ungrateful to lazy, soft, and disloyal. The weirdest part is no one blames them for this perceived lack of character. All the blame is aimed at their parents for raising a generation of kids with too much confidence thus forcing them to be self-involved narcissists without hope for redemption.

It's difficult for me to agree with this. While parents are charged with teaching their children the ways of God, and raising them to be responsible humans, children are still personally responsible for their attitudes and choices. And no matter what the situation, people in every generation and age group have struggled with a lack of gratitude and feelings of entitlement. We have a long history of pride, narcissism, and faithlessness.

Here's how I see it.

Complaining is in Our Nature

Whether we've had to work hard for what we have or if we've had everything handed to us on a silver platter, we still complain. We are masters at focusing on what we lack, rather than the abundance we have in Christ.

Numbers 11 is a key illustration of this point. Although not much time had passed since Moses led the nation out of slavery by performing spectacular miracles in the form of the 10 plagues and the parting of the Red Sea, the Israelites began to grumble and complain about their present discomfort. How quickly we forget God's provision and protection!

Gratitude is Something Learned, Not Earned

Everything created by God is good (1 Timothy 4:4) and we are to be thankful for it. However, we don't become thankful or grateful by working really hard. In fact, if that is your story you probably battle pride more than anything else. The secret is learning to be content with what you have.

Here's how Paul says it in Philippians 4:11-13: “Not that I was ever in need, for I have learned how to get along happily whether I have much or little. I know how to live on almost nothing or with everything. I have learned the secret of living in every situation, whether it is with a full stomach or empty, with plenty or little. For I can do everything with the help of Christ who gives me the strength I need.”

Take it from a guy who went from being rich and famous to being chased by mobs and thrown in prison without trial. Gratitude is not dependent on circumstances.

God Wants Us to Have High Self-Esteem

There is a difference between narcissism and high self-esteem. Someone who is described as a narcissist has the following traits: selfishness, vanity, self-importance, and egotism. When we walk around thinking we are better than others, or our actions are motivated by selfishness, we are representing narcissism. Philippians 2:3-8 warns against this type of behaviour.

Self-esteem, on the other hand, is a person's reflection of his or her value. God wants us to know how valuable each one of us is to Him. Psalm 139 is a great example of seeing ourselves through God's eyes. He knows everything about us—even how many hairs are on our head—and yet, He accepts and loves us as we are. Unconditionally.

Whether you're 20something or something else, whether you had to work hard for everything or you were born into luxury, remember we're all in desperate need of God's grace. And salvation isn't a reward for the good things we have done (Ephesians 2:8-9), it's an incredible kindness, which we so often take for granted. Maybe we're all a little bit spoiled.