The Devil Memorizes Scripture, Do You? | Insight for Living Canada
Skip to main content

The Devil Memorizes Scripture, Do You? 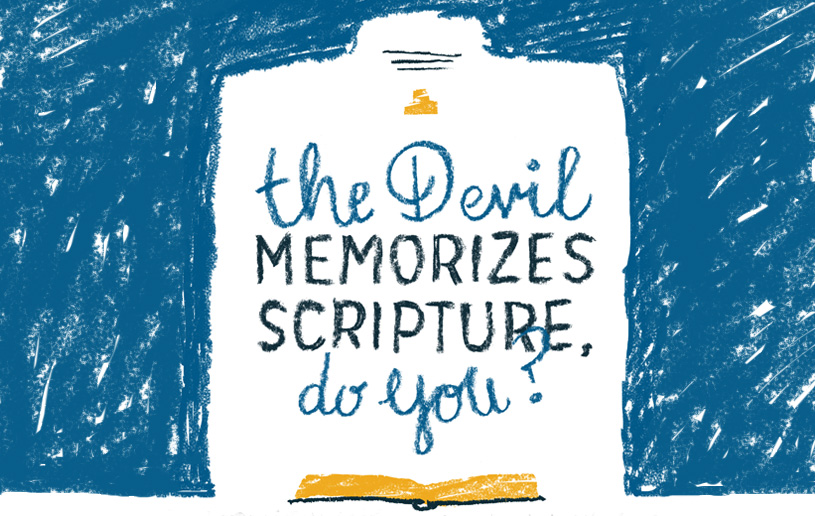 Recently, I communicated with a woman whose husband left her for someone else and subsequently filed for divorce. When she confronted him with Scripture regarding his adultery and divorce he countered, also citing Scripture. He referred to the story of the woman caught in adultery in John 8 saying, “Jesus didn’t tell her to leave the relationship she was in.” He used this as his justification even though Jesus clearly tells the woman in the story to “go and sin no more.” On the one hand, that he knows some Scripture is commendable. But the fact that he twists it to suit his own perverted actions is deplorable.

Using the Word of God for sinful ends is nothing new.

Would it surprise you to learn that our enemy Satan has memorized Scripture and uses it to tempt us to sin?

In Genesis 2-3, Satan knew what God commanded Adam and tempted the first couple by reciting a twisted version of God’s words back in the form of a question. Eve attempted to respond to Satan with what God actually said, but only offered a loose paraphrase, omitting some significant truths.

Again, Satan used God’s Word when he confronted Jesus in the wilderness (Matthew 4:1-11). In the process of trying to tempt Jesus to sin and thereby cause Him to fail as Messiah and Redeemer, Satan quoted Psalm 91:11-12 saying, “If you are the Son of God, jump off! For the Scriptures say,

‘He will order his angels to protect you And they will hold you up with their hands so you won’t even hurt your foot on a stone.’” (Matthew 4:6)

In this passage Satan used Scripture for his own devilish purposes. He tried to manipulate Jesus into claiming a promise of God in a way it wasn’t intended. Jesus had just asserted His faith and dependence on the Father by refusing to turn stones to bread. So Satan tried a reverse tactic and in effect said, “OK, so you want to prove you are dependent on the Father? Jump and let Him protect you! God’s Word says you can.”

Satan was using the authority of Scripture to suggest Jesus would be justified in risking His life arbitrarily and then expecting God to protect Him. The Devil’s tactic here was to purposely set one Scripture against another, stressing one passage and disregarding others that should go with it.

Our problem is we don’t know Scripture well enough. I’ve been among many Christians where the Bible is being discussed but I rarely hear verses quoted accurately and in context. Instead, (and I’ve been guilty of it too) I hear, “Doesn’t the Bible somewhere say something like…?” This amounts to bits of out-of-context verses paraphrased and strung together like a necklace, supporting presuppositions contradicting what Scripture says in the plainest of language elsewhere.

Jesus didn’t fall for Satan’s deception. He knew that a text out of context becomes a pretext and by mishandling Scripture Satan could make the Bible say anything he wanted it to. Jesus knew that to cast Himself down to prove something was not God’s will and to expect protection while acting in disobedience is putting God to the test—something He says is wrong (Deuteronomy 6:16).

Dealing with the Devil the way Jesus did shows us a great principle of all true interpretation: Scripture must be explained by comparison to other Scripture. Jesus used God’s Word hidden in His heart—accurately memorized and understood—to fend off Satan’s lure to sin. Jesus doesn’t try to reason His way around Satan’s ploy; He states the truth already given by God in His Word.

Ignorance of God’s Word and not having it hidden in our hearts makes us sitting ducks in Satan’s shooting gallery. The man I referred to earlier continues in sin having justified his actions by distorting God’s Word and Eve was deceived when she failed to accurately recall what God said.

The Devil has memorized the Bible but uses it deceitfully. Jesus shows us how we can stand firm against Scripture-twisting—by memorizing accurately and recalling faithfully. This is the only way to effectively stand against temptations. It is something we dare not forget.

Sermons you may enjoy