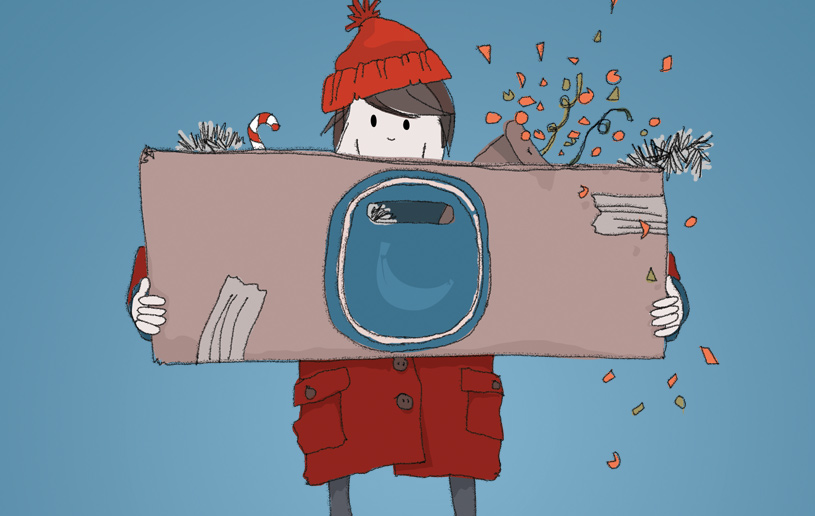 Christmases of my childhood were marked by monumental events, few more exciting than the Sunday school program, which slammed the door on three months of school and opened another on two weeks of holidays.

In fourth grade Danny Brown took up residence in the desk behind mine and the rumour travelled fast that his father had forbidden his son from taking part in the program. Some said Mr. Brown was a real-live atheist who was protesting a season gone mad with shopping and carols and mention of the Almighty. So, each Friday, Danny sat in the balcony of our church as we dutifully practiced. I pitied him for he would miss Sunday night's performance. And, worst of all, the sacred candy bags. “Fairy tales,” said Danny, when talking of Christmas. “A buncha clowns looking for an excuse to make more money.” The only Christmas song he knew was one his father made up: “O Come Let Us Ignore Him.”

Miss Farley, our choir director, was a large woman. Her arms weighed more than two of me and she got quite a workout bringing them up to speed. Somehow she stapled holly boughs to the wall behind us, framing the edges of a huge backdrop (“What Child Is This?”).

When we stood to sing, I eased a thorny clipping onto Beth Freeman's chair and when we sat down, she lived to rise again. “OW OW OW!” She howled. “Go to the balcony…NOW!” Miss Thomas ordered me, her chins trembling.

Danny was waiting for me. He had just removed his shoes and socks to massage his toes. We listened as the children sang about angels and shepherds and I told Danny another version which my mother forbade: “While shepherds washed their socks by night all seated on the ground / the angel of the Lord came down and passed the soap around.” He found this funnier than I expected, so I treated him to another: “We three kings of Orient are / Smoking on a rubber cigar / It was loaded, it exploded / Now we're on yonder star.”

A volcanic laugh built within him and stuffing a sock in it did not help. Miss Thomas glared at us and brought her arms to a wobbly halt. “I've had about enough!” she yelled.

It was too much for me. I hooted and howled. I buried my head in my lap, knowing there would be no Christmas program for so foolish a child as me.

But by Sunday night, no one had informed me otherwise, so I slicked my hair with Vaseline and dashed through the crunchy snow to our Ford. The big car lurched forward with me in it, thinking of candy bags. I wondered if Danny would be there this night. Or if he would ignore my invitation too.

The church was electric with squealing children and frantic parents bearing combs and brushes and barrettes. Roy Butler arrived with two Chiquita Banana boxes bursting with candy bags and we stood on tiptoe to measure the bags for thickness. There were nuts, hard candy and a few sugary ones—the mint green being my favourite.

With the children assembled in jagged rows, the youngsters waved and the parents searched. I searched too. But no Danny Brown.

“And there were in the same country shepherds abiding in the field, keeping watch over their flock by night.” Beth Freeman stood centre stage, the words memorized, her enunciation flawless. “And, lo, the angel of the Lord came upon them, and the glory of the Lord shone round about them: and they were sore afraid.”

And there he was: Danny Brown. Making faces at me from the balcony.

“And the angel said unto them, ‘Fear not: for, behold, I bring you good tidings of great joy…For unto you is born this day in the city of David a Saviour, which is Christ the Lord.'”

With the final prayer came the dispensing of the sacred bags. Roy Butler memorized our faces to discourage repeat customers.

Never in all my years do I recall seeing an extra candy bag, for Mr. Butler was a meticulous accountant. But this year there was. He stared at it, bewildered by his mathematics.

I cleared my throat and pointed at Danny Brown. “Hey, what about him?”

Mr. Butler smiled and placed the leftover bag in the big brown box. I walked over and, pulling a small handful of treasure from my sack, thunked it into the box. One by one the others followed. A few sneaked out, but most of us gave quickly, before changing our minds.

That night Danny Brown left the church with his very own candy bag, 10 pounds of peanuts, two oranges (one of them mine) and a handful of soft candies rattling around a Chiquita Banana box. And when I finally opened my own little treasure chest, I found another Mandarin orange and five soft candies; all of them were mint green. I couldn't believe my eyes.

Nor could I believe that Danny and his father came to our house for Christmas dinner. And they bowed their heads as my father prayed, thanking God for Mom's golden turkey and the special dressing. For buttered yams and mashed potatoes. For the world's best gravy and its heaviest fruitcake. “The laying on of Christmas,” he called it.

Mr. Brown didn't close his eyes or anything—he had a ways to go—but his son did. And when he opened them, he grabbed a fork and smiled at me. “Now we're on yonder star,” he said, shaking his head. It was Danny Brown's very first Christmas.

Subscribe to our monthly magazine
Date:
November 24, 2012
Type:
Topic:
Back to Top