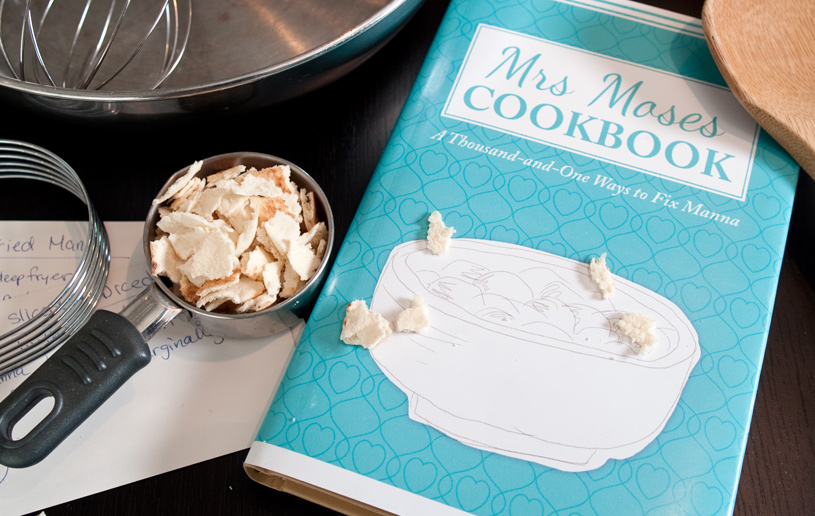 Mrs. Moses' cookbook surely had a special section on “A Thousand-and-One Ways to Fix Manna.” Unless I miss my guess, she had tried them all…many times. What potatoes are to Idaho, manna was to the wandering Hebrews for 40 long years (Exodus 16:35). They boiled it, baked it, broiled it, ground it, and ate it cold, hot, raw, cooked, sliced for sandwiches, sprinkled on their cereal—you name it, they tried it! When everybody came in to eat, they didn't ask, “What's for supper?” but, “How'd you prepare it?” Mealtime was about as exciting as watching paint dry…or listening to the minutes of last month's meeting. The most familiar sound around the table wasn't slurping or smacking; it was gagging. Oh, how they hated that manna! The book of Numbers tells us they actually lost their appetite because they were sick of looking at all that manna (Numbers 11:6). Everybody remembered the fish, cucumbers, leeks, onions, garlic, and melons back in Egypt—and you gotta be pretty miserable to want a combination plate like that!

Hold on here! What was wrong back then? When you look closely at their circumstance, you get an altogether different picture. Let me explain. They didn't have to work for their food or clothing…not one day for 40 years. Every morning, instead of going out to get the newspaper like you and I do, they gathered up from the ground the day's groceries—delivered to their front door—for 40 years! In fact, God called it “food from heaven…the bread of angels” (Psalm 78:24-25 NASB). Accompanying the morning miracle was the faithful cloud by day and the comforting fire by night (Exodus 13:21-22), which gave them visible assurance of the Lord's presence and protection. When thirst came, He quenched it with water that flowed from rocks like rivers (Psalm 105:41). Those people enjoyed a perpetual catering service without cost, limit, labour, or hassle. All they had to do was show up, eat up, clean up, and look up, and yet they got to the point where they resented heaven-cooked angel's bread. Already having much, they wanted more. Having plenty, they wanted variety. Having tired of manna, they wanted meat.

The LORD said to Moses, “Behold, I will rain bread from heaven…and the people shall go out and gather a day's portion every day, that I may test them.”

Look closely at those last five words. The manna was more than it appeared to be—basically, it was a test. It was God's examination, carefully planned, wisely implemented, administered on a daily basis. (Note in the verse the words every day.) God designed the diet to be a day-after-day, week-after-week test of their obedience, their patience, their determination to hang in there in spite of the monotony of the manna.

They failed the exam.

When I was only a boy, the Swindolls occasionally enjoyed a family reunion at my grandfather's bay cottage near the Gulf in Deep South Texas. Because the crowds were so large, we'd hire the same man each time to help with the cooking. His name was Coats. His skin was as black as a cast iron skillet, and his quick smile and quaint comments are a lasting memory for me. I remember standing near Coats one evening at sunset, watching him smear the sauce on the chunks of beef cooking slowly over a pit of coals. He was telling me about his life, which had been etched with trouble and tragedy. He rubbed his big, leathery hand through my white hair as he knelt down to my height and said:

Little Charles—the hardest thing about life is that it's so daily.

It's so daily…what a simple way to say it but how terribly true! The tests that come like a flash and last no longer than a dash seldom do more than bring a brief crash. But the marathons—the relentless, incessant, steady, persistent, continual tests that won't go away—ah, these are the ones that bruise but build character. Because virtue is not hereditary, God dispenses His “test of manna” to each saint in each generation, watching to see if there will be a heavenly appetite to accept a heavenly food. But most often, to borrow the terms from Thomas Paine's The American Crisis, “the summer soldier and the sunshine patriot” shrink under such demands. God knows that what we obtain too cheaply, we will esteem too lightly.