Confessions of a Sports Nut 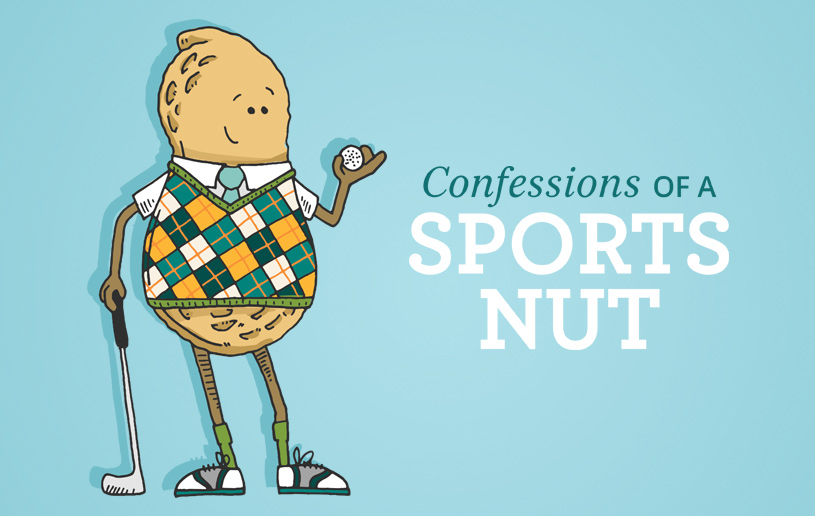 We plowed headfirst into the boards, tripped over each other, and received so many concussions that we forgot…um, now, let’s see, where was I? Oh yes…I have had a love affair with sports all my life. If it bounced, slid, rolled, or flew, I chased it. Sports were my obsession. I immersed myself in statistics and scoreboards and would sooner worship at the shrine of sport than anyplace else.

How can you know if you’re obsessed with sport? Here are three signs.

1. You proposed to your wife at a sporting event. You said, “Sweetie, you’re more gorgeous than Maria Sharapova. You mean more to me than Diego Maradona meant to Argentina in the 1986 World Cup. Marry me and I’ll be happier than Miguel Cabrera when he signed that $292 million contract.”

3. You have played golf in the snow, in lightning, or on your anniversary.

My friend Gord can tell you about my obsession with golf. In those days the two of us appeared to be normal and rational males. But take us to a golf course and the “competition gene” kicked in, forcing us to go to almost any length to win. One summer day, I lined up an important putt and Gord whispered, “Those are nice pants, Phil. Too bad they didn’t have your size.” I missed my putt completely. So, on the final hole I pointed out a mythical deer in the woods, and when he looked, I stepped on his golf ball, squashing it a quarter inch into the green. Gord lost by a single stroke that day. I think he’s still scratching his head wondering how he managed to bounce an eight-inch putt.

At times my obsession with sports brought out the worst in me. Give me a choice between time with God or time on the golf course and I threw my clubs in the trunk.

And then God used a simple phone call to change my priorities.

Gord called. “You want me to beat you again?” I asked.

“I’ve…well…I’ve just been to see the doctor,” he said. “I’ve had this scratchy throat for months, and it’s only getting worse. The doctor says it looks like lymphoma, a rather deadly sort of cancer.”

I didn’t know what to say.

“When will you find out?” I finally stammered.

“The results don’t come back till Tuesday.” Gord’s voice was shaky. “I could tell by the doctor’s face that the news won’t be good.”

There was silence. “I’m so sorry,” I said at last. “Tell you what. If the news is the worst, I’ll take you golfing anywhere you want.”

“Will you let me beat you?”

The next week was one of the longest of my life. I lived on my knees, praying for my friend. I couldn’t imagine life—and golf—without him. And as the week dragged on, I was increasingly convicted that I needed to take action myself. I had been worshipping at the shrine of sport for far too long. As I read the words of Exodus 20:3, I took it as a promise, “You shall have no other gods before me.”

So I gave my golf clubs to God. It sounds strange, I suppose. But I offered Him my obsession and asked Him to be number one in every area of my life. To fulfil the promise of Proverbs 3:6, “In everything you do, put God first, and he will direct you and crown your efforts with success,” (TLB).

“Lord,” I prayed, “I don’t want anything to take the place You were meant to be.”

On Tuesday the phone rang. It was Gord.

“I guess we don’t get to golf in Australia,” he laughed. “It’s not as serious as we thought. I’ll be fine!”

To celebrate, Gord and I golfed together. I can’t remember who won. What mattered more was the conversation, the stories of our children, and our walk with God. I’ve enjoyed few rounds of golf more than that one. I had finally discovered a simple but profound truth: Hold onto things tightly and we lose them. Place them in God’s hands and He will bring us great joy—sometimes returning them to us. And so I am scheduled for nine holes of golf with Gord later today. I can’t wait. I think I’ll try to help him with his putting.