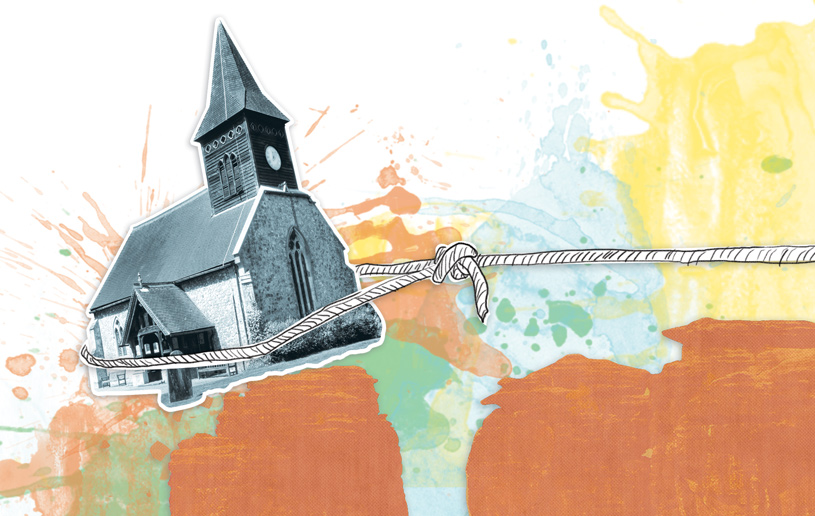 Phil: When my wife and I were first married we began reading Growing Strong in the Seasons of Life and you showed us that faith is not stuffy; it is exciting, it is relevant, it's filled with joy. Would you still say that after all these years?

Chuck: I certainly would, maybe now more than ever. I do meet a lot of grim and heartless folks—they've lost their heart for life. I know times are hard. Cynthia and I came to the realization the other day: it's always been hard. It was hard for my parents, married in the Depression, had their kids during the Depression and shortly after that World War II happened. Boy, that was hard. And then the Cold War. And then teenagers. Now you've got to seriously go to school and then the military. And then for me, finding out you're called to the ministry—that's hard. You've got to go through seminary—that's hard. It's always hard. You never have enough money. God doesn't do skywriting so you have to trust Him by faith. You have to go with what He gives you and let Him guide you and listen to His reproofs and love one another and all that goes with that. It's always difficult—always. So we've learned that since times are difficult there's no reason why we ought to make it more difficult. We ought to spread some joy. We ought to take God very seriously, but not ourselves all that seriously.

Phil: Well, you've been criticized for that, for laughing too much. How do you respond to criticism?

Chuck: You know, Phil, it still isn't fun. I can make light of it, but it hurts. It stings. I think the price you pay for that is that you're sensitive. Pastors who are worth their salt, care. If you don't care then nothing affects you and you're like a piece of steel. But who wants a minister who's a ball bearing? But if you care, those jabs hurt.

Phil: You have waited awhile to do this book, The Church Awakening. Is this a hill you're willing to die on?

Chuck: Yes I am. I'm really concerned, Phil, that we've picked up a marketing scheme for something that was never meant to be marketed. I'm saddened, really, to see the silliness that passes for what people call “church.” I weary of guys that feel that if they preach they're going to be called a dinosaur when they'd have to admit that what changed their lives was strong preaching, the faithfulness, the clarion call of a minister of the gospel who had the guts to stand there and tell you the truth. Why wouldn't that still work? Do I want to go to a physician who says, “You know, actually, you're going to be fine?” And I walk out not knowing I have a cancerous tumour in my stomach? But he wants me to feel good. He wants me to really sleep well so he says to me what I want to hear. I don't admire a man like that. I admire him when he says, “I want you to bring your wife and come back this afternoon.” And we sit down together and he says, “Chuck, you have a tumour in your stomach and after the biopsy, I need to tell you it's malignant. Now, here's what we can do.” I tell you what—I'm going back to that guy. Why? Because he told me the truth. He didn't dress like a clown, do a skit, have fun and games, serve punch and cookies and have everybody leave liking life. He said, “Come back with your wife and sit down and listen to me.”

Phil: You tell early in the book how your grandfather measured the erosion of a cliff near his cabin when you were a boy and the need for churches to measure where they are on that erosion scale. How can we measure that?

Chuck: Well, first of all, we have a book of directions, so let's just take the New Testament. If you want to, just the letters of Paul, and go to those letters that address the church, like Timothy and Titus, and make a serious study of what they say. How are we doing? Are we carrying out the assignment set forth in this timeless, true book? If the answer is no, then where are we off? Then let's do a course correction. We had to in our church. We had the wrong elders so we had to dismiss some. Was that easy? Hardest thing I've done in my life, Phil. They hate me today. They'll never understand why I did it. I tried to explain it. But we were moving in the wrong direction. Part of it was my fault because I let it go on too long. Much of it was their fault because they really didn't have a heart for what Scripture taught. They wanted to run it like a business.

Phil: How did you recognize that at the time?

Chuck: Oh man, by things they would say. And I began to feel more and more like a figurehead. They wanted me to come and preach, not come to the study at the church. They'd run the church like a business, they'd hire and fire. I'd show up and I'd say, “Why do you want me to do that?” And they'd say, “Well, because you bring in the crowd and the money.” And I finally had to say, “Stop. Do you know what you just said?” And they said, “Yes, that's exactly what we meant.” And I realized then that I'd been too far removed. I was trying to run the seminary, trying to handle several things that were like forest fires, I was writing three books, I was all involved in starting a church and I just thought, They're good guys, let them take care of it. And I realized—we are moving south. We're not moving north on this. This is wrong. So I acknowledged it and I said to them, “I cannot work with you. It's either you or me.” I'd never done that in my life. Never. And I hope never again to do that. And I said, “I take full responsibility because I voted for you guys to be here. I was wrong. We're going to do this biblically. We're going to do this right.” The salvation is that it never got to the congregation. I'm telling you more than the vast majority of our congregation ever knew. It never got there, thank goodness, or we would have split the church.

Phil: I think you said in the book that was the most difficult season for you in five decades of ministry. What got you through that time?

Chuck: That's a great question. A magnificent wife who was with me all the way. A handful of very close friends, several of whom were not connected to the church. A body of praying individuals, my extended family, my sister and a few of her friends who knew the depth of what it was. Only Cynthia knows how deep it was. But you see, if I ever go down for anything in my legacy, it will be saving the life of Stonebriar Community Church. I think I did that and I'm more grateful for that than any book I've ever written, any sermon I've ever preached. I'm grateful that I decided, today is the day. That's it. I'm not looking the other way any longer. We're going to turn this thing around. And we did. And the joy we have now is beyond measure.

Phil: What would you say to people in the pew who are recognizing an erosion in their church?

Chuck: I have a good friend who is in that position right now. For 21 years he was in a church that was doing it right and now he's watching the erosion. I'll level with you, Phil. I'd say you've got to talk to people who can make the decisions to bring about a change. If you don't get anywhere, learn a lesson from Luther who thought he could clean up the Roman Catholic Church. Finally they excommunicated him because he called a spade a spade. But you know what? He couldn't continue on in that church. So I have to say to some, if you're in a church where Christ isn't being exalted and His Word isn't being taught and truth isn't taking first place and worship isn't meaningful and it's not going to change, you're in the wrong church. The tragedy is that in some places there isn't another church to turn to. Hopefully this book will help say, “you know, folks, it's never too late to start doing what is right.” So as a pastor you can start by saying, “This Sunday morning I stand before you a broken but an honest man to say, ‘I have not been leading this church as I should have and I acknowledge it and I repent before God. I want all of you to know that's going to change. I need your prayers, I need your patience, I need courage, I need a team of people around me who will go with me through this. But I want all of you to know we're no longer going to erode. We're going to turn this around and here's why.'” And I would spell out the reasons. If he needs to quote from my book, fine.

But go somewhere to say on the basis of this, “This is the direction I'm going to take our church. Tell me now if that's not where you want to go. If it's not, I won't hang around. I won't make a scene; I'm gone. I'm going to find a place where we can do it right.” I have the feeling, Phil, that church would stand and applaud that man. Now, some would leave because they want to be entertained. That's OK. There are lots of places that will entertain you. But I've found this, when I do have that cancer in my stomach, I don't need entertainment. I need somebody who will say, “Come here. I'm going to love you through this because I care about you even if you can't swallow your food. I'm right here for you.” That's Christlikeness.

Phil: You have been in ministry five decades, which makes you 54 years of age, Chuck, by my math—I'm not real good at math. What is something you wish you had done sooner?

Phil: In what way?

Chuck: I'd have been there more. I'd have been more understanding, more forgiving, less demanding. I would have loved them into righteousness. I would have told them how much they meant to me earlier. I tell them often now. But I'd have built a bridge back to my younger son. Both of our daughters have been through tragic divorces. I don't know where I figure in any of that—maybe I don't. But every parent feels like maybe I could have said or done something that helped. But sometimes divorce can't be helped and it's how you survive. If I had been closer, would they have talked to me more? I would have been a better husband during seminary, a better father when they were little.

Chuck: It's a good question. I think, “He exercised the gifts God gave him and he did it for God's glory.”

Subscribe to our monthly magazine
Date:
March 31, 2011
Type:
Topic:
Back to Top