Christ's Birth: Catching a Glimpse of Its Magnificence | Insight for Living Canada
Skip to main content

Christ's Birth: Catching a Glimpse of Its Magnificence 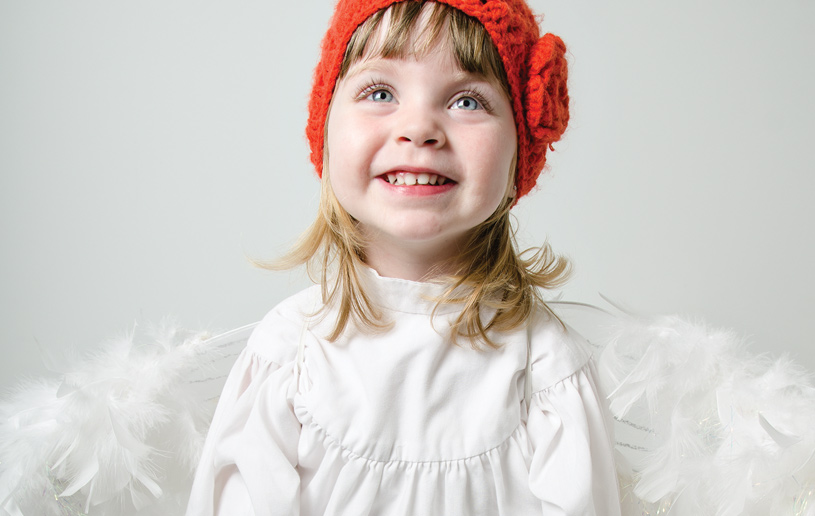 “And in the same region there were some shepherds staying out in the fields, and keeping watch over their flock by night,” read the narrator. A cluster of wee shepherds appeared on cue. They meandered to centre stage as the voice continued. “And an angel of the Lord suddenly stood before them, and the glory of the Lord shone around them; and they were terribly frightened.”

A pint-sized angel robed in white and crowned with a lopsided garland halo emerged from side stage. He stepped timidly toward the shepherds now feigning fright. “Do not be afraid,” he said. “For behold, I bring you Good News of…uh…uh….Good News of…I forget!”

The angel glanced at the audience, and panic crossed his face. He yanked his robe up past his knees and wrung it with both hands.

“Of a great joy,” prompted the narrator.

“Oh yeah. Of a great joy,” repeated the angel. His face relaxed. So did his grip on the robe. “Which shall be for all the people; for today in the city of…uh…David? Yeah…David. There has been born for you a Saviour who is Christ the Lord.”

A multitude of mini-angels joined the boy. “Glory to God in the highest,” they recited. One divine being waved at his mother. Another elbowed a haloed peer and giggled. A third poked his nose. And a fourth stared silently at the crowd that clearly enjoyed the show.

Many of us remember Sunday school Christmas programs from the past. Perhaps, as youngsters we depicted Mary or Joseph, a shepherd, king, or angel. We dressed in homemade costumes and recited our memorized lines. Or maybe we, like the pint-sized angel with the lopsided halo, forgot them.

Time has passed. Now we're the camera-toting parents or grandparents of the actors and actresses. We watch our youngsters re-enact the events surrounding Christ's birth and see it through their eyes. We share their excitement and smile at their onstage antics. But hopefully our response doesn't end there.

Hopefully we leave the event with a renewed sense of wonder, overwhelmed by the magnificence of what unfolded in Bethlehem long ago. Imagine…

Night shrouded the landscape in black. Shepherds lingered in the fields, protecting their flocks from hungry predators. The men's eyelids drooped, but they dared not sleep.

Suddenly the sky exploded and bathed them in blinding light. An angelic being, the likes of which the shepherds had never seen, appeared. He was no quivering, soft-spoken, baby-faced cherub. He was a heavenly warrior. A combatant clothed in brilliance. A spiritual force on assignment, delivering breaking news guaranteed to change life on earth forever.

Terror paralyzed the shepherds, but the angel spoke reassurance—“Do not be afraid.” And then he delivered a long-awaited message wrapped with a promise of great joy. “Today in the city of David there has been born for you a Saviour who is Christ the Lord!”

He'd barely finished speaking when an entire army of angels appeared from nowhere. They burst into song, their voices blending in heavenly harmony: “Glory to God in the highest, and on earth peace among men with whom He is pleased.”

Christmas commemorates Christ's birth. True to tradition, many of us will watch precious little people depict the events of that Bethlehem night. We'll smile at the shepherds. We'll delight in the angels. And we'll applaud their acting abilities when the program ends. But let's commit to taking our celebration a step further.

Let's take time to ponder the magnitude and magnificence surrounding Christ's birth. The event prompted an army of angels to abandon heaven's glory, descend to earth, and sing praises to God. Surely we can respond with awe-filled wonder.