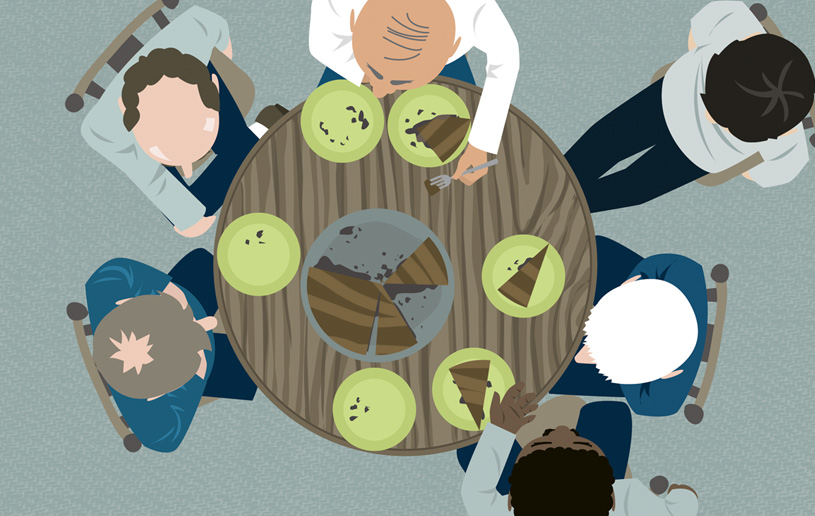 It's been on my mind since a friend asked it during our bi-weekly gathering of the Circle of Six. If you haven't heard of us yet, allow me to explain. We are six handsome middle-aged men who get together every other Wednesday to sample chocolate cheesecakes and consider deep questions such as, “If you can't see your feet while standing up, should you go on a diet?”

Of course we discuss other things, too. Lately, for instance, we've been talking about aging. The discussion started with an interesting question. A question I'd like you to consider.

Do you look forward to growing old?

Of course, all of us in the Circle of Six had a different answer. Personally, I did my best to avoid the question as long as I could by stuffing my mouth full of cheesecake. Age is relative, I thought. Fifty is old when you're 15, but not when you're 90. Furthermore, aging is the one thing we can't do anything about. If we're alive, we're aging. The alternative to aging is not the most exciting activity. But sooner or later I had to answer the question. And I admitted that I don't look forward to growing old.

I'm not alone on this one. The show 20/20 ran a story on a European woman who is spending her $104,000 inheritance trying to look like a human version of Barbie.

So far she has undergone over 100 plastic surgeries. But just like 100 per cent of the living, she is aging.

Consider for a minute the non-BOTOXed people who paint an invigorating picture of the aging process. Although not on the level of Noah (who became the father of three after turning 500 and completed the ark 100 years later), recent history is replete with names of those who refuse to act their age. Those who, like the aging mosquito, aren't content to wait for an opening. They get in there and make one. Here are just a few.

Recently, a friend and I were contemplating the shared characteristics of elderly people we admire. People who make aging look attractive. Here is a short list we came up with.

Since that meeting of the Circle of Six, I've done some reconsidering. And I've discovered that my idea of old age is changing. I used to think life was lived on a hillside. That you went up, up, up, until you reached about 50, at which point you hit an unavoidable banana peel and began a swift descent down the other side.

Paul's words make me wonder if I've had it backwards. As we grow older, the things that matter in heaven should matter more on earth. As we age, the stuff of earth should lose its value. For the Christian, the best is yet to come. We may have slipped on a few banana peels, but there's cheesecake ahead.

Subscribe to our monthly magazine
Date:
June 1, 2012
Type:
Topic:
Back to Top