You’re not alone. God is still on the throne | Insight for Living Canada
Skip to main content

You’re not alone. God is still on the throne 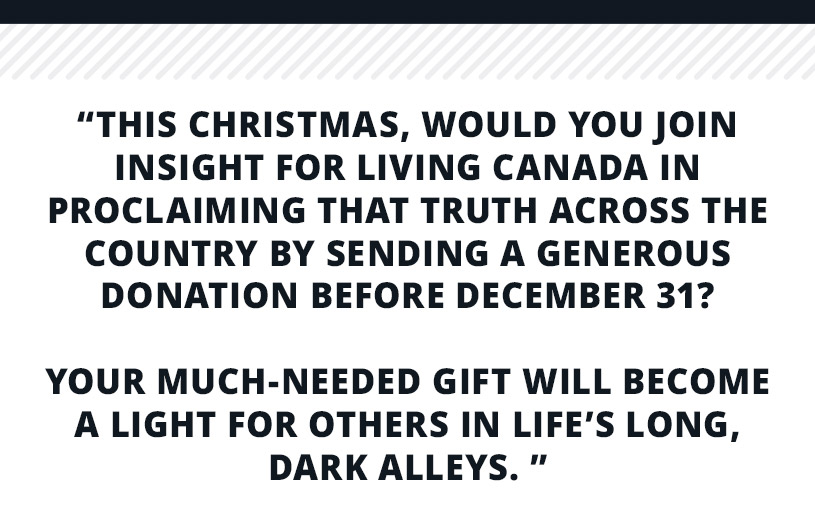 A long time ago, Cynthia and I were living in the northeast. I’d been at a church in Texas under an excellent mentor but in a position that had become extremely difficult. We had moved north, hoping a new start was what we needed.

But Cynthia was sinking deeper and deeper into a pit of depression. She had seen counsellors, taken prescribed medications doctors now know are dangerous and others, it turns out, she was allergic to. We poured every spare dime into the next treatment. But everything we tried made things worse. We had no one we could talk to. It was the 60s, and “Christians didn’t get depressed!”

We had a long alley behind our home. One night, I went out for a late walk. I got halfway down that alley, and I just stopped and looked up.

Have you been there? Are you there right now? If 2020 has knocked you to your knees, read my next words carefully:

God is in that long, dark alley. He’s not oblivious. He’s not far removed. He’s there. He cares. And He’s working.

In that alley, I couldn’t fathom how we were going to make it through the next week, much less how—through the power of forgiveness—the Lord would set Cynthia free from depression...then use her testimony to help others battling the same darkness. All those years ago, Insight for Living Ministries wasn’t even a dream!

I had no clue! But God did.

Our God is the God of impossibilities! He is the One who brings light when all around us is night...when all hope is lost. Christmas demonstrates that truth so well. Because in that first Christmas, God sent His Son as Immanuel, “God with Us.” God is still with us in this year of loss, violence, division, and pandemic. God is with us in our long, dark alleys.

The world Jesus entered was every bit as desperate as ours. His arrival was surrounded by enormous suffering. Herod the Great had seized the throne of Israel through bloodshed. He guarded his title, “King of the Jews,” so ruthlessly he put his own sons to death! Though not Jewish, he pretended to be a good Jew. He imposed taxes based on Old Testament Law...and used the proceeds to break the first commandment.

The broader Roman Empire was equally vile and vicious. Judea existed under the crush of Rome’s heavy boot. Political intrigue, racial tensions, and oppression dominated everyone’s attention. All eyes were on Augustus—the cynical Caesar who demanded a census so he could tax the people even more.

I’m talking about the census—the one that put Mary and Joseph in the overcrowded village of Bethlehem. Augustus set the scene for the Christmas story! While Rome was busy making history, God arrived. He pitched His fleshly tent on straw, in a stable, under a star. Reeling from the wake of Alexander the Great, Herod the Great, and Augustus the Great, the world overlooked Jesus the baby.

When the wise men came searching, Herod tried to trick them into revealing Jesus’ location. When God intervened, Herod commanded the slaughter of all little boys two years old and younger in and around Bethlehem. The streets echoed with weeping mothers.

Jesus’ times were rife with crisis—just as ours are. But our times bear resemblance to His in another way, too.

This Christmas, would you join Insight for Living Canada in proclaiming that truth across the country by sending a generous donation before December 31?

Your much-needed gift will become a light for others in life’s long, dark alleys. Let’s assure them together: “You’re not alone. God is still on the throne. And He’s always right on time!”

Trusting in our Saviour,

Subscribe to our monthly ministry letter
Date:
December 22, 2020
Type:
Back to Top